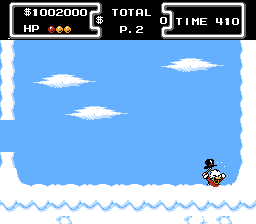 After defeating the Yeti in the Himalayas, if you pogo-jump into the snow and touch the treasure at the same time, the level will not end properly. The end-of-level music jingle will play and you'll collect $1,000,000, but the timer will continue to tick down and you'll be stuck in the boss room with nowhere to go. The only way out is to either reset the game or wait for the timer to run out. Note that doing the latter will allow you to fight the Yeti and collect the treasure again, which essentially means you can convert each of your remaining lives into $1,000,000 if your timing is good enough.

Get to the hidden shortcut path to the boss. Then, destroy all the blocks except the middle one at the bottom row. Hit the block you saved with your cane and a roller-skating penguin with an arrow at the back of its head will appear. It will quickly walk back down and transform into a white circle that can be walked through.

You do the same from the Amazon glitch, you just need to save the block on the second from the right, on the bottom row. Hitting it with your cane will cause a glitched entity to appear. Unlike the penguin from the Amazon glitch, this one just shoots skyward. If you hit it from the right side, it will eventually hit the ceiling and turn into a white circle again. Hit it from the left and it will start flying off-screen.

You can access a secret bonus stage by pulling off a glitch. It is unknown how to do this yet, but using the FCE ultra emulator savestate above, you can see the stage.