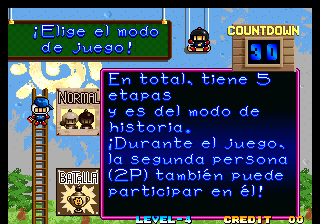 Unlike many other Neo-Geo games of the era, this has no language options in the game or the operator menu. So if you play the game on a US or Japanese Neo-Geo system, you get the expected language - English or Japanese. But if you play it on an European system, the game will be in Spanish. This also happens if you play this in an Asian region system! Other games play in Japanese when used on an Asian system.