This page details bugs of Police Quest II: The Vengeance. 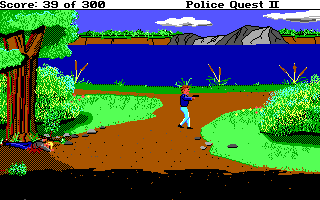 If the player is hit at the very edge of the screen by the Bainsmobile, the vehicle will drive off, back up into the middle of the screen, then drive off again. Keith will get off his comment about who is driving the vehicle, then the game freezes.
This appears to be fixed by version 1.002.011. This cannot happen in the JP version, since the car scene remains unused on this screen. 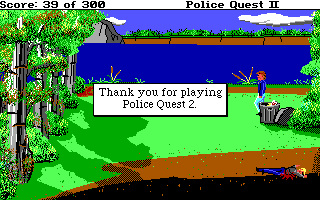 If the player is run over by the Bainsmobile on the far screen, you will get the caption for when you win the game, then the game over screen, allowing you to restart/restore/quit.
This occurs in all version of Police Quest 2, including the JP version. 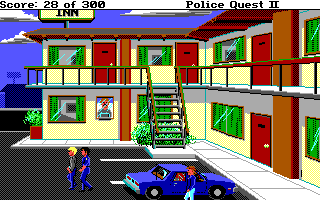 The game pauses while the officer approaches the motel with the warrant. If the players stands in the exact spot where the officer is supposed to stop walking, he will try to walk around the player, then eventually stop on his own and that game will not resume, leaving a player trapped on that screen.
The game does not freeze in versions 1.002.011 and JP1.000.052 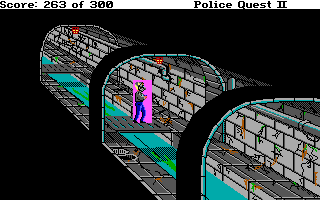 Happens while drawing a gun while wearing the gas mask. The transparency color was not properly set for most of the animation frames. This is in versions 1.001.000 and 1.002.011, but was fixed for JP1.000.052.
Attempting to shoot your gun in a methane while the gas mask is on will cause the game controls to lock up, except for the menu options, like Restore.