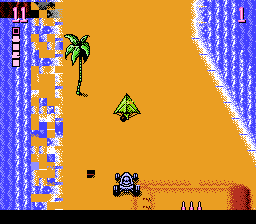 Jumping onto certain objects might cause the game to behave unexpectedly.

In the boat stages, jumping onto the "fence" (the one that's partially underwater) will make the game crash.

In the sand buggy stages, jumping onto the dust particles or spikes will make the graphics glitch out. The game might crash, but chances are it'll continue running.

Both of these glitches were fixed in the "Golden Five" multicart release. 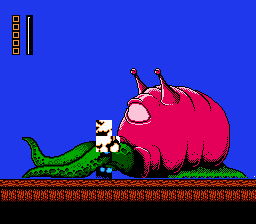 During the boss battle, if the player's vitality and the boss' vitality run out at the same time, the game will crash. This was fixed in the "Golden Five" version, where in such situation you just lose. 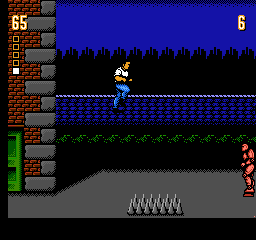 In the sidescrolling stages, when you die while your projectiles are on screen, they deviate from their expected path creating a zigzag pattern. This can also happen when pausing the game.

After the Mega Slug boss battles (worlds 2 and 5), the screen detailing the Bomb Disposal stage has one of the letters highlighted in a different color for seemingly no reason.

Other oddities and possible oversights

In the overhead hang glider stages (referred to as "Microlight Pursuit" in the manual), there are Turbo powerups which you can collect, but the glider itself has no turbo. They seem to serve no purpose other than giving you points.

The life counter at the beginning of every stage show a maximum of 5 icons, each representing a life you have available. This might have been done to reduce flicker... although when you pause the game, the game shows as many icons as you have lives, up to 9.