Call of Duty: Modern Warfare 3 is the final entry in the Modern Warfare subseries (if Modern Warfare 2019 isn't considered). With the death of our main character from the first game, a ridiculous ending, and a new developer co-developing with Infinity Ward, it ultimately proved to be successful in terms of sales.

On Overwatch, inside one of the control rooms of a crane is a chicken. It can only be seen in-game via Theater Mode, Spectator Mode, or by visiting the area with a Recon Drone.

Weapons With Leftovers From Previous Games

8 unused camos remain in the game's files, most of which appear to be left over from Modern Warfare 2. These camos are used by the AUG by modding it into the game.

On an interesting note, the ACR has an unused white camo. Either this camo was an early version of the Snow or Winter camo, or this was supposed to be the cut Arctic camo.

The Remote MG Turret shares similar visual styles with perk images in the first two "Modern Warfare" games. Possibly the Remote Sentry was going to be a perk that may have been cut for unbalancing in Multiplayer.

This appears to be an early icon for the Akimbo perk and also shares a similar design scheme to perk icons in Modern Warfare 2.

This is an early perk icon for the Tactical Insertion. This icon was actually used in the Multiplayer Reveal trailer for Modern Warfare 2, but was removed in the final game.

Blackbox was a perk that increased the airtime of Air killstreaks. This perk also was cut from Modern Warfare 2.

Challenger allowed the player to have Double XP at the cost of having low health.

This Extended Mags perk works just as the attachment does. When equipped, the player's weapons would have an extended clip. This may have just been used for testing purposes.

The Free Runner perk would have allowed you to run for an infinite amount of time similar to Modern Warfare 2's Marathon Perk.

Shellshock is a perk that would give or attach a Riot Shield to the player's back to protect them against Shellshock damage and bullet damage. May have been cut for balancing factors.

The Javelin x 1 perk is probably a leftover from a development version of Modern Warfare since Modern Warfare 3 has the Javelin as a Create-a-Class Item. It would presumably give the user a Javelin with one rocket as a third toggle-able weapon.

The Stinger x 2 Perk would have been similar to the Javelin x 1 perk. It would give the user a Stinger with 2 rockets as a third toggle-able weapon.

Painkiller is a Deathstreak from Modern Warfare 2 that increases the user's health on spawn for a limited time. The re-made image for Modern Warfare 3 suspects that this was cut later in development.

Copycat is a Deathstreak from Modern Warfare 2 that allows you to steal your killer's class during the Killcam. Like Painkiller, this may have been cut later in development due to the higher quality image.

Saboteur was a perk that is supposed to allow you to capture objectives faster. This may have been cut for balancing factors and/or development problems.

This perk appears as an early version of the Assassin perk, but it is actually for a perk called Heartbreaker. This perk keeps you off of enemy Heartbeat Sensors similar to Modern Warfare 2's Ninja Perk.

Siege is a perk that immobilizes your player, but gives greater accuracy and recoil. Due to the image design, it is unknown whether this is a perk or an early design for the Proficiency.

Endgame multiplies the user's health by four at the cost of only having a 10 second lifespan. Most likely cut due to it being almost pointless.

This perk's name is Burst Fire, but the game refers it to Mozambique. Mozambique makes the user's gun shoot in a 3-shot burst. This perk was also cut from Modern Warfare 2.

This perk, Anytwo, allows the player to select any perk for their second and third perk slot at the cost of this perk taking up the first perk slot. It may have been cut due to it being unbalanced.

4 unused Deathstreaks that were probably cut from Modern Warfare 2, but it's in Modern Warfare 3's files. The last icon is leftover from Call of Duty 4.

A cut gamemode. Not much is known about it beside the fact that there would be a target area. Only sound files remain. Some text in the game hint that Grinder is the early name for the gamemode Drop Zone, as Drop Zone's internal codename is "grnd".

The game contains an unused soundless cutscene depicting the end of the mission "Crew Expendable" from the first game that was intended for the Prologue.

During the flashback to "No Russian" in this level, Yuri has a unique third person model that can only be seen by utilizing cheats. Interestingly enough, other playable characters' third person models are usually from models in multiplayer, and missing their heads, whereas Yuri's model is complete but slightly discolored. 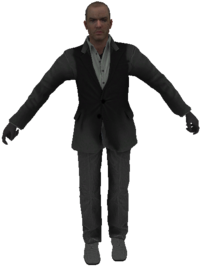 Inside the IWD archives of the game are 3 unused files which were meant to be used within this mission, presumably from an alternate or extended ending of the level.

The background music that would have gone along with this scene.

One sound effect for that scene.

Another sound effect for that scene.

There doesn't appear to be any dialogue left over from that scene in particular, suggesting it got cut quite early in development. However, dialogue files for Makarov during this mission aren't in the archives for the Dubai folder itself either, so it may be that there actually is some dialogue, it's just hidden from plain sight.

Within the memory of the game while this mission is being played, there are some old left over strings of text referencing this possible ending. 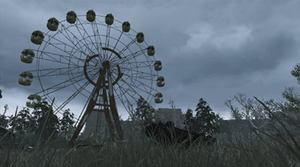 Judging by the name, one can assume this mission would have had the player(s) defending a ferris wheel. Who would want to attack a ferris wheel anyway?! There are two versions of this image present in the game's files. One is named "so_defendferris_lobby.iwi", and the other is named "so_dlc1.iwi". The ferris wheel in the image is Pripyat's ferris wheel from Call of Duty 4: Modern Warfare. 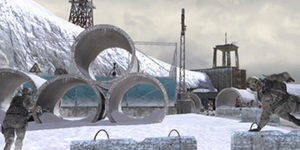 The Lobby image shares some similarities to the Spec Ops mission "Fire Mission".

An exclamation mark. The image is named "party chat".

An explosion icon for the minimap.

A minimap icon for the grenade.

The Harrier kill icon from Modern Warfare 2. Interesting enough there are sound files for the Harrier being called in.

The attack helicopter kill icon from Call of Duty 4.

Two minimap icons for the I.M.S. The green one would presumably belong to your team while the red would be the enemy's (though it is unknown if a perk would be needed for it to show up on the map.) ‎

The RPG D-Pad icon from Call of Duty 4.

This image is from the first Call of Duty. 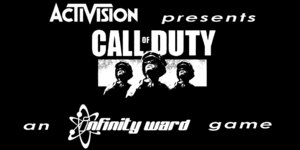 There is an Picture for developers/designers left in the game files. 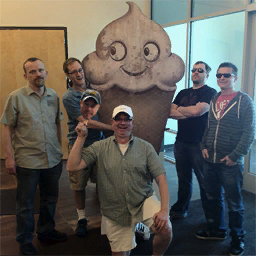 In the PS3 version, there are unused title cards.

Only in the PS3 version, there is an unused card icon.

As with the rest of the Call of Duty series, there were a number of differences when the game was ported to the Wii which include: