World at War heads back to all that World War II business after the success of Modern Warfare. Highlights include flamethrowers, co-op and an inexplicable minigame called Nazi Zombies which has... well, guess.

These perks, killstreaks, vehicles and other things have leftovers in the game data.

A tier 1 perk that would have given the player six PMD-6 landmines. The icon still exists.

Allowed the player to give orders to their squad. In the final version all squad leaders can do this. The icon still exists.

Amm-o-matic is a cut Perk-A-Cola intended to be included in Shi No Numa. Only a texture sheet and voice files remain.

There are unused voice lines in Shi No Numa seemingly meant to be used when the player opens a door with a perk-a-cola machine inside, which, in the final game, spawns a random Perk-A-Cola machine (as opposed to the static nature of the machines in the other maps).

Unused Traps in Shi No Numa

Shi No Numa has unused voice lines referencing traps that weren't included in the final version of the map.

The guillotine appears to be a trap that temporarily blocks off a certain part of the map, secluding the player to a limited area if they fail to escape after activating the trap.

The barrel is a fire-based trap, but little information about it can be gathered from these voice lines.

The battery is an electricity-based trap, and much like the barrel, not much information can be extrapolated. It's possible that it was cut in favour of the zappers, which were used in Zombie Verrückt, the previous map. It's also possible that the battery is just an alternative name for the zapper, but since these voice lines are unused despite the zappers being in the final version of the map and not having related voice lines, this seems unlikely.

The chopper is (unsurprisingly) a trap intended to chop the zombies.

Dempsey has a "safe" version of swamp_guillotine_block_00.wav, which was (presumably) meant to be used instead of the normal version if the player had graphic content restricted in their game settings:

In the sound files for Der Riese, there are 78 unused voice lines from five different voice actors, portraying four different characters. A few of these voice lines are identical to ones found in the final version of Der Riese, although the voice actor is different.

Player0's folder contains voice files from two different voice actors. 38 of his 48 voice lines are from a young-sounding male with an American accent. This actor's lines relate to crawlers, dogs being stronger, the power being off at the start of the game, monkey bombs, the Pack-a-Punch machine, Carpenter, shooting limbs from zombies, feeling sick from teleporting, and obtaining the Bowie knife. The remaining 10 voice lines come from a deeper, more gravelly American voice, reminiscent of Dempsey. These voice lines relate to the teleporter countdown when linking them up, and asking for help with linking them up.

Player1 is very reminiscent of Nikolai; he has a slightly raspy Russian voice, and is potrayed as an unintelligent, lazy, alcoholic. He has 10 voice lines in total, all relating to the teleporter countdown when linking them up, and asking for help with linking them up, just like one of player0's voices. In one of his voice lines, he calls Richtofen by his name, asking him to link up the teleporter. This possibly indicates that these voice lines are from voice actors who were meant to play the four characters in the final game, rather than being used for a new set of characters. However, it doesn't seem to make sense how these files were included in the Der Riese sound files, considering that these characters were introduced in Shi No Numa.

Player2 is a male with a Japanese accent, like Takeo, except his voice is slightly deeper and raspier, and somewhat calmer. Like player1 and Nikolai, player2's mannerisms are similar to Takeo's, although he doesn't seem to be as stereotypically Japanese as final Takeo is; he doesn't have as many "deep" sayings, nor does he talk about things like honor. His 10 voice lines all relate to the teleporters, just like player1.

As you might expect, player3 is very similar to Richtofen. His 10 voice lines also relate to the teleporters.

Below are some examples of each voice actor's lines.

Picture of Barrier and Roof of the room.

To the left of the bowie knife, underneath the catwalk where zombies can drop down immediately after climbing over the barrier into the map, there is a door that leads to a largely unmodelled and untextured room, accessible with noclip. There are only a handful of textures in this room, but from what we can see, it appears to be lit by a red light. In the middle of the room, there is a floating block of wall, shaped similarly to that of the wall barrier in the help room in Nacht der Untoten. By moving the camera inside this block, it is possible to see that it is comprised of lots of smaller blocks (again, similar to the wall in Nacht der Untoten). This suggests it was intended to be used as a barrier. There is also another room right next to the previously mentioned one. This room appears to be smaller and only contains a door. Interestingly in Black Ops 1 the Barricade, and the red lighting was removed, but the door and ceilings remain.

In _zombiemode.gsc, there is a lot of script related to "zombifying" the player, a feature not seen in the final game. It would give the player the "brains" weapon, set their movement speed to 30%, cause all zombies to ignore them, etc. When the player is killed as a zombie, they are downed (and presumably could be revived by other player zombies).

_zombiemode.gsc makes mention of "crawler rounds" which seemed to have been intended to behave like dog rounds (every 4-6 rounds).

In the script for zombie animations (wall_hop_zombie.gsc), there is a section of code relating to how dogs should hop walls. This functionality is not present in the final game.

There exists a script file (_zombiemode_auto_turret) defining the logic for how auto turrets would work in Nazi Zombies, although this is never used in the final game. There is a variable called level.max_auto_turrets_active (which is set to 2), suggesting there were intended to be multiple. It would have cost 1500 points, and would have had a "timeout" of 30 seconds (it is unclear whether this is the duration or the cooldown). There would have been a unique line of dialog that played if the player tried to buy a turret without having the points to afford it.

A cut attachment. In real life a compensator reduces the recoil of the weapon its attached to, like the grip in the final game.

Another cut attachment. The select fire most likely worked the same way it did in the first Call of Duty and in United Offensive. It would have been for the SVT-40, was mentioned in the World at War strategy guide, and its select icon has the silencer on it along with "This is a Select Fire Switch" in green.

Air Strike: A payload of bombs being dropped in a selected location. It was probably cut in favour of the artillery strike killstreak.

The most notable unused rank icon is the Treyarch logo icon. Had the icon been used, one can only assume that it was meant to be part of a specially coded system that would have had the Xbox Gamertags/PSN usernames of all Treyarch employees on record, which would subsequently allow the game to apply the special rank icon for the employees. Unfortunately, the Treyarch rank icon never made it into the game.

A cut gametype. Little is known about it, being the only thing that proves its existence is audio files of the announcers two unused APCs. According to the name, and the voices from the announcers the gametype was going to be based around armored warfare. Not only does the voice acting remain but three armored cars remain also one for the Marines, one for the Japanese, and one for the Germans.

Payload is a cut zombies game mode. Players would have had to escort a payload under time pressure. Scripts and a .map file can be found in the mod tools. The presence of the .map file suggests that there would have been a specific map designed for this game mode.

A bunch of placeholder textures can be found scattered throughout, many including developer messages and humorous writings.

Only referenced in the vehiclename.str file.

A six wheeled, untextured, and crudely made vehicle with two MG42s and two Panzershrecks made to test vehicle driving.

The M4 Sherman tank has three unused models. The first one has an M2 Browning machine gun on it which may have been for Tank War. The second one was equipped with deep wading gear. The third has winter camouflage that was definitely for the Holland level.

An armored car intended for the Marines. Despite having a machine gun and a turret neither one of them has a weapon file. The file name of the model, "vehicle_usa_wheeled_m8_mp" shows that it would be in Tank War.

A German tank destroyer. Coding shows that it was to appear in the cut Rhineland 2 while a Tiger tank was used as a placeholder (maps\_tiger::main( "vehicle_tiger_woodland" ); // TODO replace with Nashorn!) and would have to be destroyed due to it being an objective (level.obj7_string = &"RHI2_OBJ_7"; // disable nashorn). The Nashorn would be found in a church and the player would have to burn the crew and then the level would end.

The German's armored car. Four models remain for it, a "default" model, a variant for MP, one with camouflage (odd since the German Military never appear in heavily wooded areas), and a winterized version intended for the Holland mission. One is also seen in the loadscreen for the cut "Wetlands" map.

A winter version was intended for the Holland level.

An APC for the Japanese that does not seem to have any weapons on it, as per the vehicle in real life. The name of the model "vehicle_jap_tracked_type1ho-ki_mp" confirms it would be featured in Tank War.

A version with a MG42 was planed for MP.

A flamethrower-equipped variant of the Universal Carrier. A model file (vehicle_brt_tracked_wasp, _wasp.gsc) but no actual model remains.

The German air force. Its members are never seen directly but have two headless models and a unused helmet.

Files referring to them can be found along with a headless model. According to Wikipedia, they were a German national militia formed during the last months of World War II and fought in the Battle of Berlin, so they would most likely be found in the missions Ring of Steel, Eviction , Heart of the Reich, and Downfall. 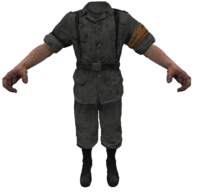 This most likely represents the original intended order of missions. Some levels such as Burn 'em Out (pel1a), Relentless (pel1b), Downfall (ber3b) are not mentioned suggesting that those levels were not included until later in development.

Note: The status files for rhi1, fly and oki1 are present but are essentially blank with all scripter tasks being reported as 0% complete, so are not included here.

According to the German Strafgesetzbuch §86a, the usage of unconstitutional symbols (Nazi symbolism, basically) is forbidden outside of certain contexts such as research and teaching. As a result, the swastikas and other explicit references to the Nazi regime were removed from the German version of the game.

In addition, the blood and gore was severely toned down, and both the final FMV sequence and the Nazi Zombies mode were deleted entirely.

You can see a direct comparison of both versions of the game at this German-language website.