Part of Sofel's strange line of games about kids trying to earn wealth beyond avarice by various means.

In actuality, Casino Kid is the localized version of a Japanese licensed game titled $1,000,000 Kid: Maboroshi no Teiou Hen, loosely based on the manga $1,000,000 Kid (written by Yuki Ishigaki). A HUGE amount of content was cut from the localization, which makes you wonder why Sofel even bothered...

There's a few unconventional passwords hidden in the game, that don't follow the rules of the normal password system. Please note that for these passwords, an underscore indicates a space, so select the "Forward" option to move ahead one space. In the Japanese version, enter the passwords in the name entry screen and not in the password screen.

To get these codes to work, you must hold A + Start after entering the password until you start on the map screen or the desired result is not achieved. 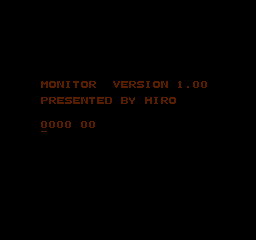 In addition, there is a password that accesses a Debug Mode, but some extra steps need to be taken in order to access it. First, input the password as mentioned above.

The first option is a memory watcher and editor. You can use Left and Right to pick a digit, Up and Down to change its value, B to switch between address (four digits, 0000) and data values (two digits, 00). When an address is set, its data value updates from memory. Pressing A on the data value set writes back a data value to the desired memory location.

Pressing Start from the Memory Watcher brings you to a music test. Press A to go ahead one song, and B to go back one song.

At any time, you can press Select to exit the Debug Mode.

As previously mentioned, Casino Kid cuts out a massive amount of content found in the original game. This includes, but is not limited to, two extra casinos you can travel to besides the main one (which also gives you something more to spend your money on than the casino games), various opponents and NPCs, as well as two entire casino games, the slot machines and roulette (the latter of which would return in the American exclusive sequel). However, even what was left of the original version was heavily changed for American audiences.