Castle Quest is an obscure-but-okay Europe-only chess-style strategy RPG for Game Boy, ported from the Japan-only Famicom game of the same name, which was planned for an (ultimately cancelled) release elsewhere under the name Triumph. Mind you, it shouldn't be confused with the NES game called Castlequest in the US, which was known in Japan as Castle Excellent.

Enter one of the following words as a player name in Quest mode. 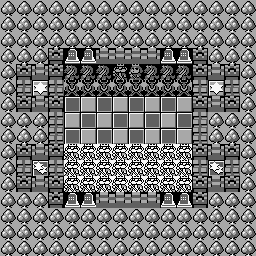 Enter your name as URAMEN in Quest mode to play the secret Castle 26. On the player's side will be the 24 castle kings, and the final will be on the opponent's. Being that the player only has kings on their side, the game will end if one is defeated.

The amount of figures on the board makes the CPU think very slowly, but the level is fully functional. If beaten, it will show you the final dedication from the last King, then jump to the regular ending sequence with credits.

Enter your name as HODRACH in Quest mode to see the regular ending.

There are a few strings in the game resources which have no cross-references in the code.

The last one is from an unimplemented link mode selection menu. The final game has no link mode support, with the two-player mode played on a single console. However, the link transfer/handshake code is present in the game's code and seems fully functional, but it just never runs under normal circumstances.