After harsh criticism for the lack of challenge in the recent "Metroidvania" entries, the switch to an anime-like graphical style, and a serious lack of female protagonists in the franchise as a whole...came this. They sure tried their best.

As in Portrait of Ruin, the portrait debugging dialog text also exists in the game. This time, it's located in the last section of the ROM.

The description was removed in the English (US) ROM, but the test routine still exists. 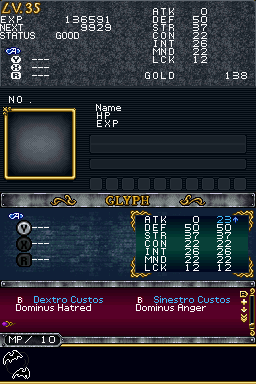 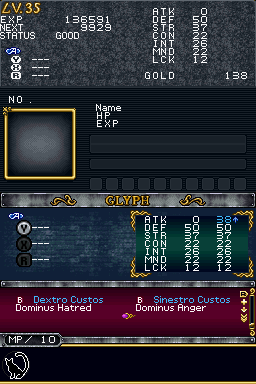 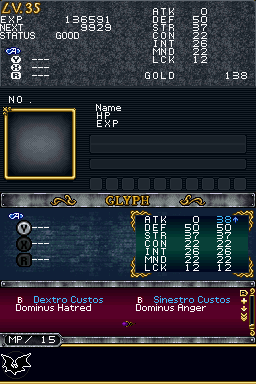 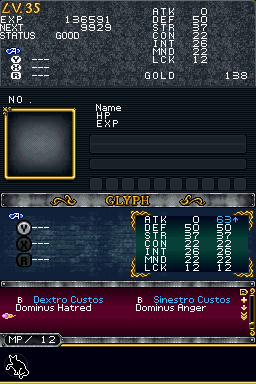 There are four unused Glyph skills that belong to the X/Y-button Glyph section. They have no descriptions, but they're actually glitched counterparts of skills exclusive to the Arma Chiroptera and Arma Felix morphs. 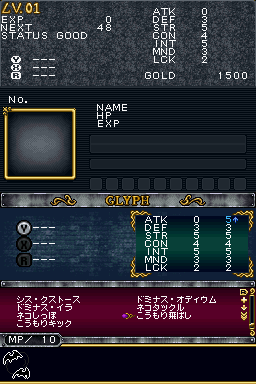 In the Japanese version, they have names: "Cat Tackle", "Cat Tail", "Bat Flying" and "Bat Kick". No descriptions exist. 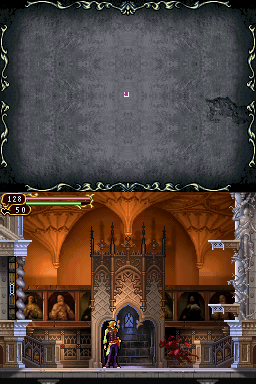 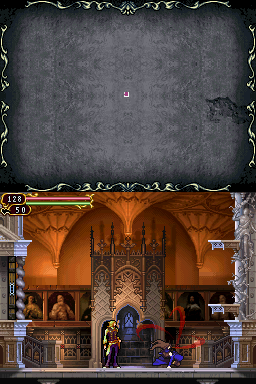 Cat Tail is glitched; Shanoa will crouch for a while, and its slash effect only shows when tapping the attack button repeatedly while it's being used. 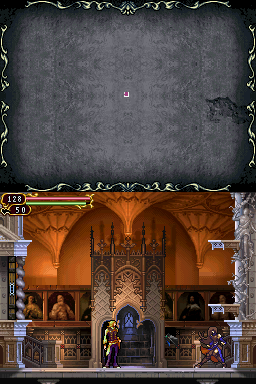 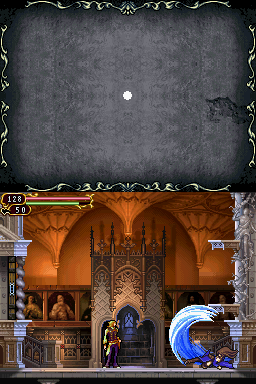 Bat Kick works properly, but Shanoa will crouch for a while.

Albus's trusted gun Agartha once had a Glyph entry, but it was left unused in the final version. It belongs to the R-button Glyph section. The Japanese version has a description: "Normal bullet. When PL, use your hand to hold Y". The description is blanked out in the US version. 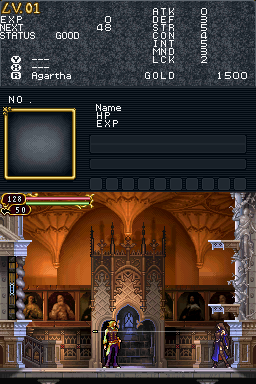 Agartha is somewhat glitchy, without posing motion, and it's missing the auto-fire ability when equipped by Shanoa.

To access the unused Glyph entries, use the Action Replay code shown below:

Use the code and press SELECT in-game to access all Glyph skills, including the unused ones.

Max UP Item Coding in Menu

To access the unused Max Up item entries, use the Action Replay code shown below:

Use the code and press SELECT in-game to access all use-items, including the Max Ups.

All Glyph Union moves have unused Japanese descriptions; it's possible that at one point in the game's development, you could check your Glyph Union set in your bestiary along with your X/Y/R button normal Glyphs, but since it wasn't really necessary and adding the pointers to set Glyph Unions to "collected" would spend lots of ROM space, it was eventually scrapped in the final game. Note that Albus's Light/Dark shot belongs to the Glyph Union slot in the game's memory.（The Glyph Union descriptions were listed in the Japanese official guide.）

No English text exists in the corresponding slots of the English ROM; the localizers might have thought they were placeholders and deleted all of them.

A text string for a weapon slot... or a leftover of something. Its initial/original purpose is unknown; the most likely scenario is that the developers could've forgotten to fully remove the Vampire Killer's coding in the game, or left the bare-bones coding in on purpose.

Presumably meant for an Easy Mode option to go with the used Normal and Hard modes. This string also exists in the English (US) ROM.

Lines for (presumably) a mode to edit the color of your character's gauntlet or stockings, which isn't present in the final game. The reason why it was scrapped is currently unknown. No English text exists in the corresponding slots of the English (US) ROM.

An unused golden brick object with spikes on its right side. Its hitbox properties remain intact. This object can deal damage to enemies, but its default attack power against enemies is hardcoded to be 1-3 damage per hit, which is unusual. Enemies defeated by this object only count as enemy kills, which won't give any sort of skill point increase.

A mysterious "LETTER" option is stored along with other sprites for the pause menu sections. It's marked by two question marks, implying that it was removed at some point during game development. The intended function of this option is unknown. No visible remnants of graphic/text data exist that can prove the usage of this function.

Among the tiles for the Arma Machina ability are two other Automatons that Shanoa would have been able to transform into. Only the orange one is used in the game. The taller of the unused ones is incomplete, lacking proper shading on her waist, legs, and guns.

Above is a mockup of what the unused Automatons would have looked like, alongside the used form and Shanoa for comparative purposes.

As Shanoa uses the same tileset as the Ladycat and Black Panther while she is in Arma Felix form, the above animation of her turning back into a human upon death are unused. Notably, the otherwise brunette Shanoa turns into a blonde in this animation, a carryover from the Black Panther's death animation.

Albus's sprite data contains a golden color palette for that purpose meant for Agartha, his magical gun, that goes unused in-game because it instead erroneously uses the same palette as his body.

An unused portrait of Shanoa lurks within the files that is clearly incomplete. It reuses the palette used by Shanoa's normal portraits. Included is an ingame screenshot. 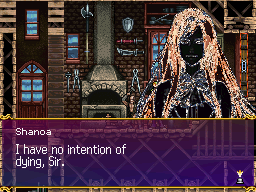 Graphics of Schmoo from Symphony of the Night are contained in Scarecrow's graphic set (p_scare.dat folder), but it never appears in-game.

Dhuron's old power-up move. It still has its hitbox intact.

Dawn of Sorrow/Portrait of Ruin Leftovers

For some reason, a portion of Jonathan's leg from Portrait of Ruin is left over within Shanoa's graphics.

The alternate version after completing the mission The Statue's Tear in that game.

Among the graphics for the three levels of the Ascia Glyph, a redrawn version of Dawn of Sorrow's Level 2 Axe Armor bullet soul graphics is hidden.

The slash effects of Double Axe Armor remain in the graphics file for regular Axe Armor. Additionally, palettes for all three versions of Portrait of Ruin's Axe Armor variant remain in the palette data. 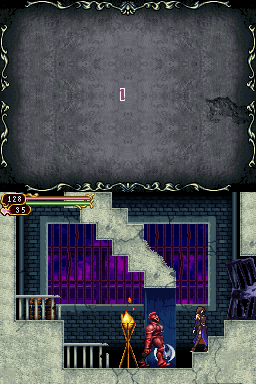 The files from sc/f_rire00.dat to sc/f_rire38.dat are the exact same enemy list card graphics from Portrait of Ruin!

Jonathan's sub-weapons from Portrait of Ruin.

An unused blockade from Dawn of Sorrow, redrawn in Portrait of Ruin's style.

There is an unused track that is not available in the Sound Test, titled "BGM Arrange", which is a leftover copy of the "Beginning" track from Dawn of Sorrow. It's likely that this track was included by accident, as the tile set of Wygol Village is actually modified from Dawn of Sorrow's Lost Village and lots of leftover tiles from it weren't cleaned up. 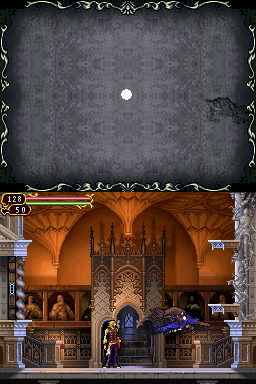 Richter's slide jump kick from Portrait of Ruin and the effect for Richter smashing against the ceiling during a super jump remain in the game data as an animation property, but can only be restored through ROM editing tools.

"Gate To The Underworld" and "Game Over" (from the original Castlevania) are present in the Sound Test, but not actually used in-game.

Gate to the Underworld

Gate To The Underworld's internal name is "Cerub", which may imply that it was going to be used in the Cerberus statue room in the Forsaken Cloister area. However, the Forsaken Cloister area doesn't have an alternate value to store two tracks, since it only has one overlay. It could have also been used for the long stairway before Dracula in the Final Approach area; the Final Approach area has a second overlay used for the long stair, but in the final game both parts use the same track ("The Colossus"). In Portrait of Ruin, the long stairway before Dracula is also stored as a separate overlay value for Master's Keep, and it uses a different track than the main area.

The Game Over fanfare of the very first Castlevania game. Possibly meant to be accompanied by other NES-era music tracks? In the final game, if the player's HP reaches zero while any of the NES soundtrack discs are playing, the regular Game Over music is used.

The game also contains an unusually large number of unused voice clips, all of which were dubbed into English and can be played in the Sound Test. It's worth noting that in some of these clips, Albus calls Agharta by its Japanese name, "Agate".