A direct sequel to Castlevania Bloodlines, Portrait of Ruin takes the "switch a character" gameplay of Dracula's Curse and Dawn of Sorrow's Julius mode and fully fleshes it out.

Of course, Portrait of Ruin wouldn't be complete without, well, portraits. And not only do you have the actual paintings in the game, you have, of course, face portraits too. At some point during development, they had a script of dialog that would basically cycle through each and every face graphic. If you notice carefully, "ka," "ge," "ma," and "sa" are cycled through each message. When put all together you get "Kagemasa" (Kozuki) who is the current chairman and CEO of Konami.

The complete text dump for both English and Japanese versions:

Note they changed the Japanese expression name to the "Kagemasa" name placeholders in English.

HP and MP Max Up Items

The "HP Max Up" and "MP Max Up" items are normally used immediately after picking them up. However, fully-functional inventory versions exist, which can be accessed with the Action Replay code 02111BFC 99999999.

Much like the previous game, some of the "alternate game mode" primary weapons – specifically Richter and Maria's – are actually items rather than hard-coded to each character. As such, it's possible to get them in a Normal Game through the use of glitching or Action Replay codes. Sadly, this isn't the case with the Sisters or Old Axe Armor, whose weapons are hard-coded to their respective game modes.

Richter's Vampire Killer can be accessed in the US version of the game by using the Action Replay code 22111C31 00000010. The description is the same as Jonathan's "unlocked" Vampire Killer whip (or either whip, in English releases), but it has less attack than the unlocked version (22 instead of 28). 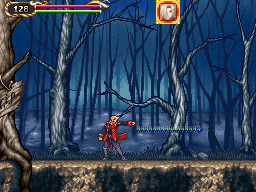 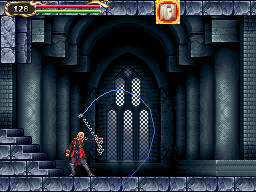 Due to the sprites being aligned for Richter, it technically has better range than Jonathan's Vampire Killer, but it lacks any weapon-specific Critical Art. The limp whip-dangle move can be used with Whip Skill 1, but it isn't compatible with Whip Skill 2's diagonal-down attack.

Since this version of the Vampire Killer is considered a different weapon from the one Jonathan starts the game with, you can carry it over to a New Game Plus and just run riot.

Maria's vicious attack dove can also be accessed in the US game and used by Jonathan using the Action Replay code 22111C50 00000001. It lacks a unique or fitting icon, defaulting to the Knife, and has a very basic description which differs between regions (「まりあ」 ("Maria") in Japan and "Tori" in English). Incidentally, "tori" (or 「とり」) is the Japanese word for "bird". Ergo, Maria's bird is literally called "bird", here.

Unlike Maria, Jonathan can only toss one dove at a time when standing. It is possible to launch more when coming down from a jump or back-sliding, however. Otherwise, it works exactly as expected. Again, no Critical Art for this weapon. 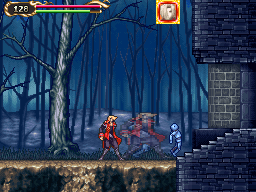 Every sub-weapon that's available to Richter, Maria, and even Old Axe Armor's "Puppet Master" ability are fully functional for Jonathan. None of them can be leveled up, but they all work as expected with two exceptions: Maria's (misspelled) "Genbu" is virtually identical to Jonathan's "Stonewall", and…

… Jonathan defaults to his Dual Crash animation when using Richter's "Grand Cross". The result sadly looks a bit off.

As a sidenote, it would appear that Old Axe Armor's "Puppet Master" the alternate "Axe" sub-weapons were Bullet Souls ported straight from Dawn of Sorrow as they have the exact same descriptions and Japanese names (「パペットマスター」/ "Puppet Master" and 「アックスアーマー」/ "Axe Armor") as they did in that game.

In the game ROM, the text "Tori"("とり" in Japanese ROM) refers to Maria's Dove attack (stored in Weapon slot in the game's memory). In the Japanese ROM it has a description reading "まりあ" (Maria) while the English ROM simply copies its name.

Pointers 4BE to 4E6 (4BA to 4D6 in the Japanese ROM) are song (and area) names in Dawn of Sorrow. The Aguni boss theme, Portal To Dark Bravery ("闇凛の大扉" in Japanese ROM) is used in the game (albeit renamed "Great Gate of Darkness"), but the rest remain unused.

Not as interesting as leftovers from recycled graphics, but there's still something shiny.

There is evidence that the Holy Water subweapon would've used a different NES-style flame for a non-mastered version, but was eventually abandoned for final.

B-U-T, this particular frame was actually used in a preview video of early gameplay - for placeholder graphics of relic pickups!

There is evidence that the secret modes were originally meant to be selectable in the title menu (Dawn of Sorrow style), but since the game engine had been updated to the newer one used in the final they are no longer needed and abandoned.

Sprite version of the mysterious "Another Mode" selection graphic, misspelled. It's yet another evidence of "Another Mode" itself did exist at one point but being abandoned/replaced by Old Axe Armor mode fairly early.

Fake Trevor never had an exclamatory mark following a partner's action in this game, nor in Symphony of the Night.

A bone made tomahawk-like weapon. Probably intended for Axe sub-weapon for Fake Ralph/Trevor. Even in Symphony of the Night it didn't make an appearance.

Ruler Sword/Spectral Sword's graphic data has a strange rope-rod-like weapon that can't be seen in the final version. The grey-ish palette is the closest palette possible for it.

Richter has an unused air dive kick attack that even has hitbox properties programmed, but didn't make its debut until Harmony of Despair.

thus Richter's leg would retreat after a kick instead of always stretching to its full length when performing an air dive kick from on high.

Lerajie's unused shooting variant; it's actually a leftover from the preview video mentioned above, though she never shoots bullets without an arc in the final game. 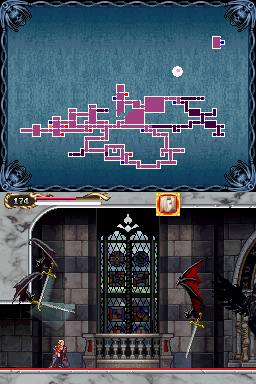 Razor Bat retains the spawner version variant from Rondo of Blood and uses the exact same speed as in Rondo. This may cause it extremely hard to avoid its blade attacks so the reason it got abandoned is probably because balance concerns.

A huge portion of leftovers from previous Castlevania games. 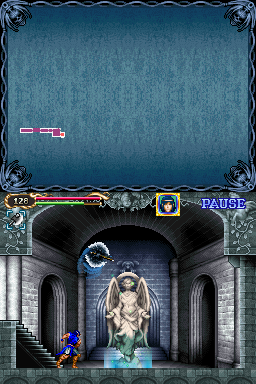 The game contains a leftover of Bullet Soul: Axe Armor (Level 2) from Castlevania: Dawn of Sorrow. It can be accessed in the Japanese version (NDS-0676) by using an Action Replay code below:

Use the code and press SELECT in-game in order to add the Axe Armor Bullet Soul (Level 2) as a replacement for Richter's Axe sub-weapon. Compared to it, the normal Richter Axe sub-weapon sprite, and the Level 1/Level 2 forms Bullet Soul: Axe Armor in Dawn of Sorrow, it strongly supports a theory that Richter's version was borrowed directly from Dawn of Sorrow, and even the abandoned (old/DoS system) leveling system was not deleted. Julius in Dawn of Sorrow, actually, also borrowed that very soul for his Axe sub-weapon. It likely was never claned up by mistake during development or they just didn't bother.

Here's a text dump comparison below: 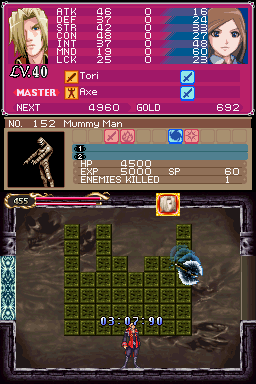 The folder sc/f_axe00.dat-sc/f_axe01.dat contains graphics of Dawn of Sorrow Axe Armor! It could be anything, from a legitimate way to get richter's Axe move for Jonathan, or just a leftover along with its soul powerup, or they could have merely forgot to remove the DOS Axe Armor altogether. 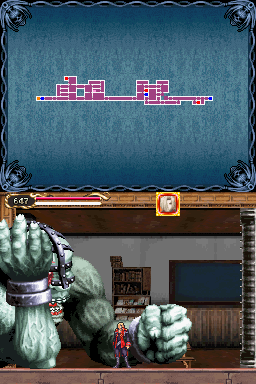 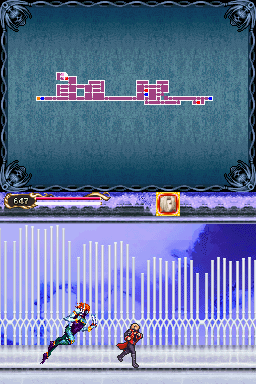 The Balore and Zephyr boss intros from Dawn of Sorrow remain in the game data should the player hack them in a more-than-two-screen length room in anywhere other than Nest of Evil through map editor tools, and set their Var A value as 01.

A leftover road blocker object from Dawn of Sorrow, redrawn and unused in that game anyway. Likely used in a demo version, although a preview of early gameplay did show this roadblock graphic in action.

The Dawn of Sorrow style wooden wall included within the barricade's graphics.

A single frame of Soma's Bat Company Morph from Dawn of Sorrow is left within the graphic data of Owl Morph for some reason.

Hidden within the graphical data for Amducias are graphics for the Discus Lord from Symphony of the Night. The enemy has two animations for idling and throwing his discus. 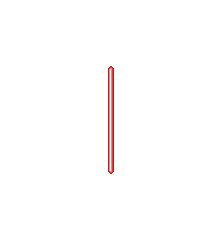 Legion's old "berserk mode" laser attack from Symphony of the Night after all corpse parts removed.

A single frame of Owl from Symphony of the Night. Owl didn't appear in the DS title until Order of Ecclesia.

Minotaur still has his Symphony of the Night blocking animation as a boss.

Richter still has most of his Rondo of Blood graphics in the ROM, including all stair-related animations. These unwelcome reminders of Castlevania's past thankfully go unused.

Richter's Symphony of the Night power-up animation used when he's about to power-up his whip to flame whip.

Richter's Knife Item Crash Animation is still in the ROM, but Richter never uses any Item Crash other than Grand Cross (which itself was a receycled Julius Mode move).

Minotaur's graphic data contains his old boss intro from Rondo of Blood but never used due to him being a regular enemy in this game, and never having the opportunity to bust through a door.

The graphic data of Frankenstein's Creature contains his old stone debris attack from Rondo of Blood but never used since all his attacks are upgraded for the new game engine.

Mummy Man/Akmodan II still has his old Rondo of Blood bandage attack in the ROM but it's actually modified in this game to be a heat seeking bandage attack.

Along with Razor Bat's graphics assets are chipset graphics from Stage 7 of Rondo of Blood.

Stored in Laura's graphic files are tiles for the Carmilla boss arena from Rondo. All original Rondo of Blood palettes are intact.

Richter's name was spelled as "RICHITER" on the Japanese and US versions' file select screen (Due to an apparently miss in Japanese-English spelling conversion). This was corrected in the European version, and the Japanese revision.

Charlotte's name was missing an L on the Equip screen (also because of Japanese-English romanization). This was also fixed in the European version and later Japanese revision.

It should be no surprise that a lot of items were renamed or had their descriptions changed during translation. However, it seems that the Vampire Killer whip had unique descriptions for the normal and "unlocked" versions in Japan. The English version just uses the same line of text for both versions.

There are several glitches and exploits in Portrait of Ruin in other countries that got fixed for the European release and Japanese revision.