Castlevania III: Dracula's Curse completes the 8-bit Castlevania trilogy. Set centuries before the first game, the protagonist of Dracula's Curse is an ancestor of Simon Belmont. Despite dropping the non-linear elements of Simon's Quest, the game contains branching pathways and the ability to switch playable characters.

At the title screen hold A or B (or both), then press Start. The sound test was designed to fit at the bottom of the Japanese version's title screen; the routine wasn't altered to take the larger title screen of the US version into account, and displays it over the copyright text as a result. The European version does a better job of not displaying anything over anything else. 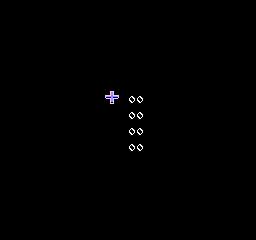 Game Genie code KVEVPYEP sets memory address $0018 (a global event/menu index) to $07 when beginning a game, which is one byte higher than normal and hence allows access to the debug menu. Note that the menu is very similar to the one in the Teenage Mutant Ninja Turtles prototype, right down to the cross-shaped cursor.

When starting a level from this menu, the first 100 points you score will instantly give you a 1up.

This allows you to choose which stage, act and screen you want to start out on. For a full list of every room, see the Notes page.

This allows you to choose which partner you start out with:

There are graphics for melted sub-weapons that went unused.

At the end of the PRG ROM is a text string identifying the date on which that version of the game was compiled. A similar ID is found in many other Konami games.

"MAST" means it's the "master" version of the game, and the numbers represent the date. The Japanese version was originally a Sample ("SAMP") version built on October 7, 1989; the US version was built at some point in 1990; and the European version was built on January 17, 1992.