The Game Boy Centipede has a horribly convoluted history – it was first released as a monochrome title by Accolade in 1992, which was followed in 1995 by a compilation title with Super Game Boy support (Arcade Classic No. 2: Centipede & Millipede), published by Nintendo and developed by The Code Monkeys. Majesco later picked up the license, disabled Millipede and the Super Game Boy features, and released separate versions for monochrome Game Boy and Game Boy Color in 1998. Confusing as this seems, all versions have label revisions giving the specific version away.

While this page covers all releases of the game, it largely concerns the Majesco versions due to the wealth of content removed from them. 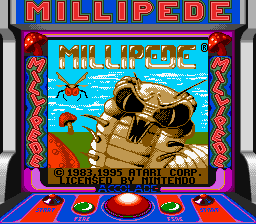 The graphics associated with the menu have been overwritten with Majesco logo, so while its functionality is intact, the menu can't be seen. Millipede is selected by default and can be launched with Start; pressing B selects Centipede and Start will launch it as usual.

In fact, the 1998 version ROM technically is exactly the same binary as in Arcade Classic No. 2: Centipede & Millipede, except they replaced some graphics with a new logos and removed some portions of code by dumb NOP patches.

Since this is the same ROM, every tune from Arcade Classic No. 2 exists in the Majesco versions and can be accessed in exactly the same way: changing offsets 0x1C000, 0x1C001 or using Game Genie codes ??0-00B-803 + ??0-01B-A2B. The selected song will play instead at the Centipede title screens in the monochrome and US GBC versions. Replace ?? with the respective song ID.

There are two unused string resources for two missing features, completely removed from the final versions, located around 0x0155B-0x015A9 in the 1992 version and 0x18ED5-0x18F23 within all versions.

First one located at the top of the game text data block, but has no pointer in the string table at all, so totally unreferenced. It represents some kind of sound debugger/editor screen.

Second one seems to use a different font, because rows are compressed, and obviously should be a sound test menu.

The original 1992 release contains different music than all other versions. Neither Millipede nor the Super Game Boy features exist in this version. 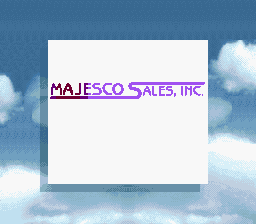 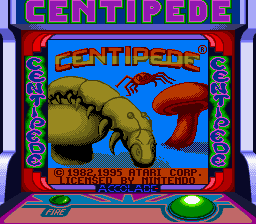 In the 1998 Majesco releases, Super Game Boy functionality was disabled (though not removed from the monochrome ROM), likely because the developers were too lazy to fix the Super Game Boy palettes for both the Morning Star and Majesco logos. The enhancements can be re-enabled in both 1998 releases by setting the Super Game Boy flag: modify 0x146:03 or use Game Genie code 031-46F-E6A.

This works well in the monochrome game, but in the US GBC release the SGB features were mostly removed and have bad pointers everywhere; however, the command load and call functions are completely intact, so they will still load.