One of the very first attempts at selling a localized version of a game for the Mexican and South American market. Outside of Brazil, that is. It would later happen again, this time to Boxing Legends of The Ring, as Chavez II.

Riddick Bowe Boxing showed Bowe's career statistics if you let the game sit in the title screen for a while. There's no such thing in this version of the game, but the text is still present at 0xC3C3 in the ROM. The text is stored out of order.

There's also a third secret boxer which was a leftover from the previous game. The first two (AXY and SPOT) were revealed by Mexico's Club Nintendo magazine back when the game was first released, but the third boxer's name was never mentioned. His name, FRIEDA, is stored at 81C8 in the ROM. Create a boxer, enter the name, select OK, then press Start. 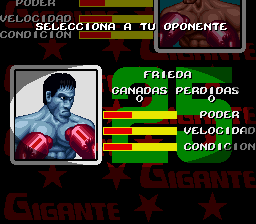 This results in a blue colored Chavez which appears to have normal stats.