This is a sub-page of Chibi-Robo!/Debugging Rooms.

Internally referred to as "stage00", this is the first room ID in all versions of the game. It contains many NPCs, all shrunken to Chibi-Robo's size, that allow the player to warp to different room scenarios that have the character in it. Aside from the NPCs, the room also has four types of liquid available to be cleaned or sucked up with the Squirter - Funky Sweat, Honey, Water, and Oil - three 100 Moolah pieces of varying size, and two flowers that can be used with the Squirter to get Nectar and Legendary Nectar.

A few things of note: 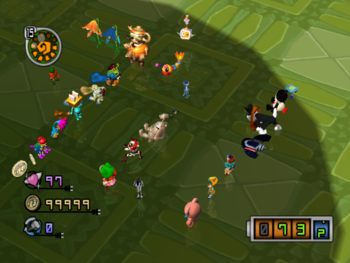 While this room is localized, The translations used in this room retain the original Japanese character names - for example, Telly is referred to as Tompy, Redcrest is Giccioman, and so on. There are also a few grammatical errors in some of the choices; the translations might have been done by the original development team, and not the localization team.

In the tables below, red and blue options are choices for the player.

Mr Prongs, unlike the other characters, gives Chibi-Robo several items and statuses.

Talking to Funky Phil also immediately fills up your energy.

Talking to Dinah gives you an instant 100 Moolah. 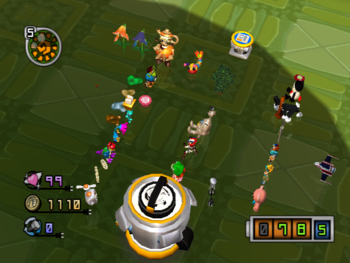 In the Japanese release, this room is much more fleshed out. There are more options available to choose for every NPC, items you can turn on and off for the scenarios, and even an RGBA editor for the Sepia effect - Not to mention several additional NPCs, including a Chibi-House and a Teleport Utilibot.

In the tables below, red and blue options are choices for the player.

Upon talking to Tao, you are asked the following prompts:

After which, you will get the menu.

If it's your first time using a Teleporter Utilibot, Telly asks if you want to be told how to use it. Afterwords, if you stick the plug in and teleport with it, a text box with ワープ中 (Warping) will flash, and you'll be spat out.

Pressing B brings up the next menu.

Upon talking to Redcrest, you'll be asked the following prompt.

Afterwards, you'll be sent to the menu.

The Chibi-House has five options that let you change the time for each day. The times available are: 10, 14, 20, 24, and 30 minutes. This does not change the graphic - time will just go down slower.

Upon talking to Sophie, you are asked the following prompts:

You're then given the menu.

Upon talking to Plankbeard, you are given two choices:

You're then taken to the menu.

Mr. Prongs, instead of warping, has options to give the player tools and items.

Upon talking to Funky Phil, you are asked the following prompt:

You're then taken to the menu.