China Warrior is a beat-em-up released early in the PC Engine's life. It's notable for its impressively gargantuan character sprites that take up 50% of the screen's height. Unfortunately, the sprites were too big to do much of anything with, resulting in a simple game that's basically a clunkier take on Kung-Fu Master. 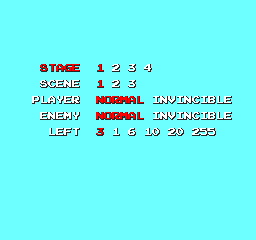 During the game, press and hold Run (which will pause the game) and then Select and the game will reset. While still holding these buttons, release Run, press Up, and then release Select. Now, press Up(×3), Right(×6), Down(×2), Left(×2) for this menu, with a level select and settings for invincibility (for both the player and enemies) and lives.

Besides the name change to China Warrior from The Kung Fu, the US release flipped the title screen's background and shifted the not-Bruce Lee character from the center to the right, so that he's now kicking towards the temple instead of the lion statue.

Since NEC published the game in the US, a "From NEC" credit was also added to the US title screen above the Hudson Soft copyright info.