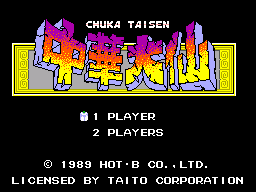 The game was not released in Japan, but had programming that would detect a Japanese console and show "Chuka Taisen" instead of "Cloud Master" on the title screen. The Master System port is the only version of the game that translates the game's name for some reason.