Based loosely on the Atari 2600 game of the same name, Combat features hovertanks shooting various things, some of which are also hovertanks. It has no plot whatsoever, and seems largely devoid of personality.

Pressing ~ brings up a command console. Cheats are disabled in-game, but enabled in the main menu. Here they seem to be crucial, as turning them off and then on again causes the game to crash when you try to navigate the menu. The help, dir, health and addlives commands work fine in the main menu. Next, name, map and restart cause it to crash immediately. Opensesame and enemyspawn do the same as mlpdev. These are the commands: 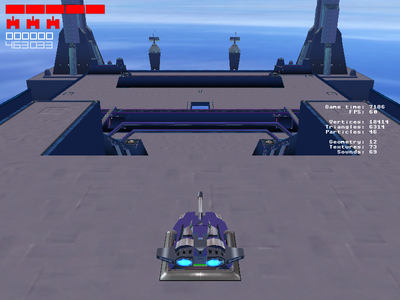 Several things can be toggled in-game when cheats are on as well. Most of these print text to the console:

The file containing enemy definitions starts with several toggles for enemy debug functions, all of which cause lines in various colors to be drawn around and from enemies. None of these have any effect on bosses, but they do work for any enemies spawned by them. The text in boxes are the explanations from the file itself. 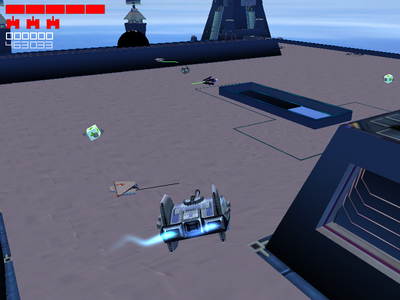 A short line appears, for most enemies in the direction they're pointing. It takes on various colors depending on the situation of the enemy: 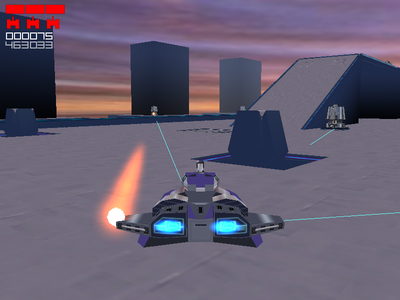 Displays a cyan line to the player when possible; This can be cut off by walls. These disappear when the player is cloaked. 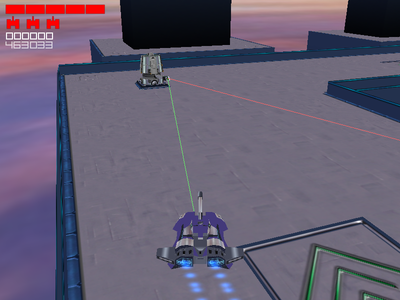 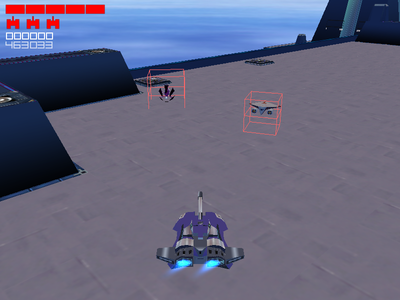 Displays two red boxes related to collision, although for most enemies the lower box is partially in the ground. 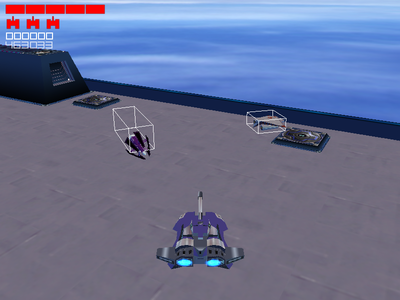 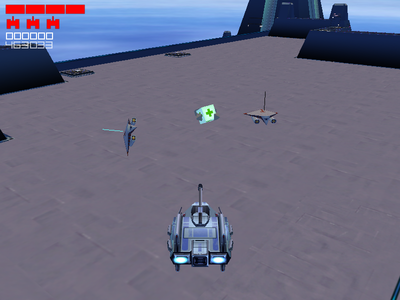 Displays a black line above every enemy. When cheats are on shift + ] allows you to cycle between enemies, the currently tagged enemy's line will be red. Shift + [ will give you control over the enemy and turn the line cyan. Carrier's fighters also initially spawn with their line cyan. In this state they cannot be interacted with in any way, although this can't normally be seen.

These are the controls for controlling an enemy:

What controls work depend on the enemy you're controlling. For example, the large turret is the only enemy capable of angling its turret.

In the name of efficient hard disk use, 58 out of 150 items from the sounds folder are not even loaded by the game.

Some early enemy and powerup definitions. The Solid Fuel Drone has ID 0 in the final list (ID 1 is the Buzz Bomb) and awards 50 points instead. The Digital Tank has no known equivalent in the final, but it's difficult to say for sure with so little to go on.

The final powerup definitions also include their effects, and several are missing from the above list. LevelSkip was cut. 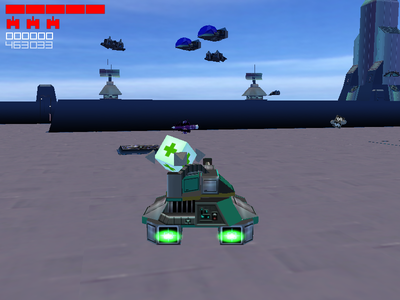 Since there's no enemy to go along with the ID a copy of the Solid Fuel Drone has been used.

Enemy ID value 4 is the only unused one that doesn't default to what seems to be Dagger AI. It causes the enemy to periodically spawn pairs of Carrier's Fighters. Unlike Carrier's these Fighters don't seek out the player. Instead they will aimlessly fly about, slowly descending until they crash into a wall or sometimes the floor. They will shoot at you if you happen to be in their sights though. The spawner enemy will move if it has no line of sight with the player and will freeze if there is.

The game supports closing exits after a set amount of time. This is never used, even for secret levels or the shortcut in level 1 as this would leave the player trapped. While the game defines a sound to be played when closing an exit (the same sound used for opening one) nothing plays when one closes.

The game's manual states that you can change between three camera angles using F1 through F3. Instead in the final game, you switch between the low, close-in view and a higher downward view with F5; The overhead angle is not available. Two different versions of the latter can be reached by appending View4 and View3 groups to the controls.txt. View2 and View1 can also be added, these correspond to the low and higher view respectively.

Both are similar and work somewhat inconsistently. The angle you transition from influences how zoomed in you are: the low angle causes more zoom than the higher angle (screenshots are made with the latter). Normally your tank is at the bottom edge of the frame, but if you die while using one it centers on your tank. You can switch between the two without losing this, but switching to one of the used ones resets the centering. You have to be at the same height as pretty much anything you'd want to attack and vice versa, so these are more or less useless.

In the Goodies folder on the disk are: 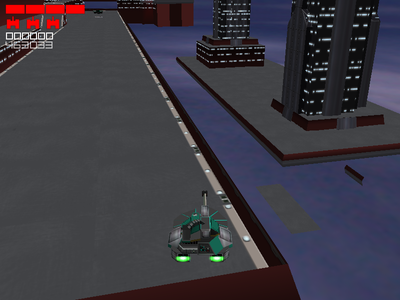 Below a decorative platform in level 19 ("Clear Air Turbulence") are a few tiles of floor and a platform rail. Although the building above is visually 3*3 tiles, it only uses 1 tile in the level.