In Combat, there are three settings for skyboxes: no sky, simple and fancy. No sky simply colors any empty space on-screen a single color. Simple consists of two color gradients, which are by default at the horizon but can be shifted higher or lower. Fancy allows making a sky out of textures slapped on cones or as a flat sprite, as well as loading models. Lighting and fog are coded into the skybox. These are all stored as .txt documents, so they're not particularly difficult to edit. Capitalisation is not very consistent between files, with one even being in all caps.

All of the final game's skyboxes take place in space, VR or nondescript clouds. Some of the unused ones show more variety of locations. 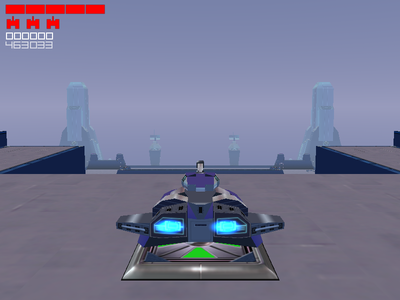 This doesn't load properly on fancy because it references test.bmp, which doesn't exist. The game loads default values instead. The simple version loads fine, and is light blue. The fancy version would have used ocean04.bmp for its bottom hemisphere.

This is an alternative version of VRskybox01 This is a different skybox for the boss gauntlet version of the Buzz Bomb Queen fight, which is the only one that is different from its normal version. The final is significantly larger, as well as having a flatter bottom hemisphere. Lighting is different between the two as well: bluelinessky uses red and pink, while VRskybox01 uses light blues.

The simple version has an error fixed in the final: one of the gradients is the wrong way around.

An early version of vr_02, the skybox used in Void and Up & Over Relay. Its lighting is slightly brighter and it uses clouds from the first few levels. The final uses an unique texture, consisting of the cloud texture of the early version with an image of a galaxy overlaid. The simple/no sky versions are identical to the final.

This is unlike anything in the final game. Both its hemispheres use a blue web texture, and there are two pink cloud rings. The simple version is dark blue and black.

Another odd case consisting of a plane of ugly water and a light blue sky. The black line is the bottom hemisphere, which is untextured. The simple version uses a considerably greyer sky and a lighter sea.

Surprisingly, this is based on a skybox called galaxysky, which is used in the final. The only difference between Copy of galaxysky and galaxysky is the lighting. Copy has light come in nearly parallel to the floor, lighting only one side of the level well. Walls can be difficult to make out from some angles as a result.

This is a version of the skybox used in the tutorial levels with very red lighting. The final's is closer to purple.

defaultsky was probably a placeholder, having only lighting set up. Either it or the default values in-game have changed since it was made, as it is more harshly lit than the values loaded when a skybox cannot be loaded (BlueClouds01 on fancy, for example.)

A version of the skybox for Alkahest, a multiplayer map, with black fog. This fog is also in the final; The only difference is that it is off in DOME2. 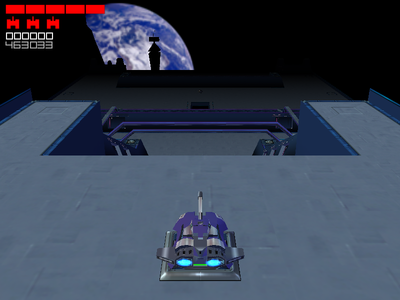 This is based on one of the Alkahest skyboxes above. It has all non-lighting colors set to black though. Rather than the dome model this references a model called vr_skybox_knot.AMO, but this isn't present anywhere. It would have scaled this up by a factor of 6; Combined with the fact that the game enlarges skybox models to huge sizes anyway, this would mean that vr_skybox_knot.AMO would have to be very tiny to still be visible in-game.

Shown above is Lava Sky01. Lava Sky references lavatop.tga and lavabot.tga, neither of which exist anymore. It is missing simple and no sky colors. Lighting is the same between them. The lava is a rotating plane rather than a hemisphere; Lava Sky01 reuses the top hemisphere texture for that. An interesting thing is that a screenshot featuring Lava Sky01 or something similar made it on the back of the game's case.

The map editor gives an example of a skybox. It's the same as Lava Sky01, but is missing color data for the simple and no sky versions as well. Those will be black.

Similar to CombatStartSky02, featuring a more pleasant looking sea (an actual hemisphere this time, and not a plane. The lighter edge on the water is due to the camera pointing down slightly through a transparent cloud layer. The simple version doesn't resemble the fancy one much.

tinysky is an early version of moon. The moon is indeed tiny. It's not much wider than CenterCity, the level moon is used in. It is also much closer to the level, close enough that you fall through it if you fall off the level (which is impossible on CenterCity) and for some lower elements to clip into the moon.

The early simple version is just a dark blue/grey gradient, while the final simulates the moon's surface with the lower gradient.

A rather simple thing. The fancy version uses a galaxy for both hemispheres and spins very slowly. The simple version is an odd orange color.

Retrieved from "https://tcrf.net/index.php?title=Combat_(Windows)/Skyboxes&oldid=703945"
Categories:
Cleanup > To do
Subpages