This is a sub-page of Command & Conquer: Generals.

To use the debug tools, you need two files, DebugWindow.dll and ParticleEditor.dll. You can get these, for example, from the prototype game. Once you have these files, open a command-line window and start generals.exe with the parameters -win (it only works in windowed mode, not full-screen mode) and either one of the two parameters, depending on which debug tool you want to use: 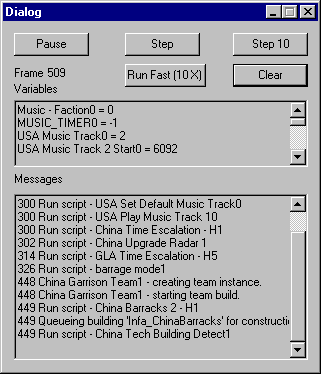 The interface is easy to understand. The Variables window shows all variables defined at run-time, with their contents. The Messages window is used by the game to report what the scripts were doing at a certain frame. There's also a frame counter which counts all the frames that have already elapsed. Note that the script debugger slows down the game a lot.

There are five buttons you can use.

Completely contrary to the script debugger, the particle editor uses a very complex interface. This is due to the many possible options for particle systems in this game. However, it still does not allow all possible options, probably due to its age.

The next part, System Parameters, has many options for editing the actual particle system. In the first section, the following changes can be performed: 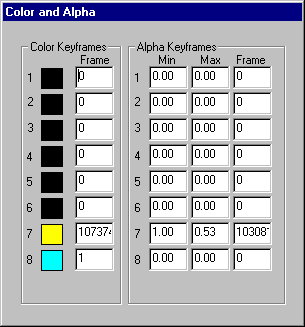 Clicking on the Colors/Alpha button opens another window. This is a very important window, since it allows you to color the particles and add transparency.

The Color Keyframes section allows you to set the color the particle should assume during its lifetime. If you click on the black box, the standard Windows color dialog pops up allowing you to select the appropriate color. The color you selected will then appear in the box. In the Frame field, you enter the frame the particle should change its color in. There are eight fields, allowing you to change the color up to eight times. 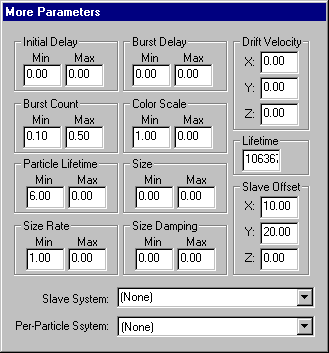 Clicking on the Continued... button opens another window with some additional options to finetune the particle system.

The Per-Particle Ssytem (sic!) does the same, but for each individual particle, rather than just for the entire particle system.

In the File drop-down menu you can find the following options:

Inside the executable, more debug text can be found:

Retrieved from "https://tcrf.net/index.php?title=Command_%26_Conquer:_Generals/Debug_tools&oldid=568522"
Categories:
Cleanup > To do
Subpages