Another American general that was intended to appear in the Generals' Challenge, Ironside has a complete sound set and may have been an American "boss" general analogous to General Leang. No Generals' Challenge map exists for him and his actual faction design is unknown, although he has been recreated in several mods including the popular "Shockwave." Notably, the picture that is commonly passed off as his portrait is not in fact the one used in the development of Zero Hour.

It seems like the Spectre Gunship used to work like a normal unit at first. If you click somewhere after it has bombarded the area but before it leaves the map, it will respond with move voices but not do anything. There are other unused sounds, like "Spectre is nearing the target area" which are equally unused. 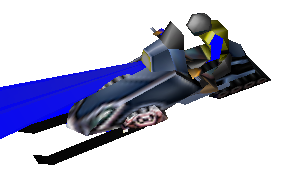 Apparently, the Ranger was supposed to mount a snowbike under snow conditions. This was more than likely planned for all infantry, rather than just this one. However, there would be all kinds of issues with it (like snowbikes entering transport vehicles), which was likely why the idea was abandoned.

The American Command Center has an unused animation which shows the radar dish building up, like if you purchased the radar upgrade. This is unused because America starts with radar at all times. However, you may have been required to purchase the radar upgrade yourself at some point in game development. Note also that in the Worldbuilder, the American Command Center appears without the radar dish, even though you never see it like this in the game.

The American Aircraft Carrier, which normally only appears in the second American mission (but can be placed on custom maps via Worldbuilder) has unused wakes which would be used when the aircraft carrier is moving. But not only does the wake move in the wrong direction, but planes cannot land on moving objects due to game engine bugs, which forced the developers to make the aircraft carrier a static building.

The selection pictures of the Tank Drop of the Chinese Tank General are found in the file where the American selection pictures are stored. On top of that, they depict American Crusader tanks, rather than Chinese Battlemaster tanks. This suggests that originally the Tank Drop was supposed to go to America, but since it does not really fit any of the factions, it may be either a relic of the prototype (which had an American Tank General), or a sign that the developers wanted to resurrect this idea for the expansion pack.

An alternate version of the Microwave Tank selection picture exists within the game files. One wonders why it exists, maybe there was supposed to be a special Microwave Tank for one of the generals.

This selection picture of a Patriot Battery is unused. It could have been intended for Airforce General, since he's the only general who does not get a customized Patriot Battery. However, there are no clues on this one.

This appears to be an alternative icon for the Fuel Air Bomb, or perhaps a ground attack icon for the Aurora.

One of the many leftovers from the prototype that made it into the expansion is the old Crusader. The tank which is called the Crusader in the final game was called the Leopard tank in the prototype.

It's easy to notice the characteristic gold skin, shared across all prototype assets. The Crusader was able to be upgraded with a Hover upgrade, allowing it to travel across water. One leftover of this is the upgrade icon, which comes from the prototype and exists in both the original game and the expansion. 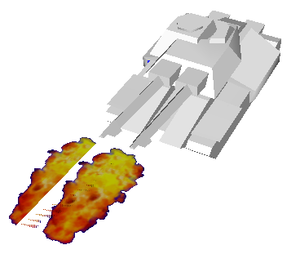 This untextured model shows that the developer team intended the Mammoth Tank from the original Command and Conquer to appear in the game at some point. However, the idea was scrapped very early on. 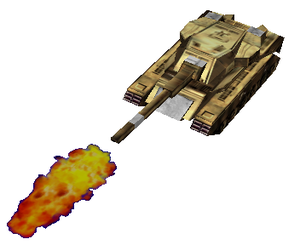 Another tank, with only a subtly different design. The art team was probably just brainstorming ideas at this point of development. 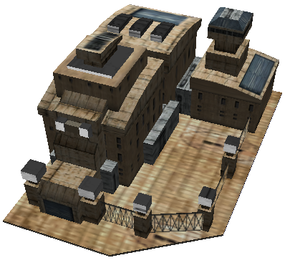 This is another prototype leftover - an early idea for the Detention Camp. With this gold color and the looks of all the stuff, the game would have been much different than what it is now. 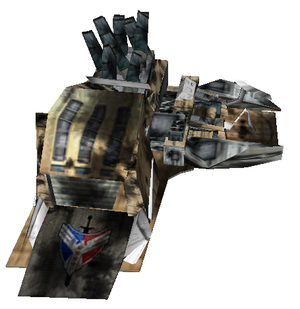 Somehow, this prototype War Factory managed to sneak into the game. However, only the really damaged condition remains. Note especially the early design of America's logo. It looks a lot like the logo of the Allies from Red Alert 2, actually. 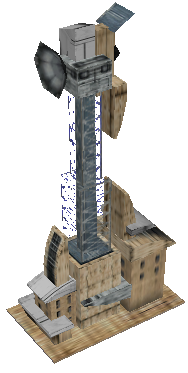 Now this is a building which does not have a counterpart in the final version. It was most likely related somehow to the old "guardian" drones system. 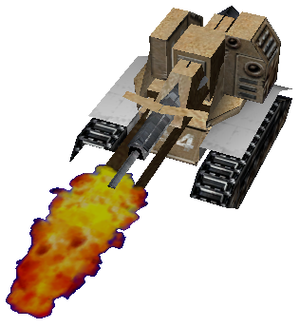 One of the many old drones for use with the old "guardian" drone system. All of the drones do exist in the game and can be placed with the Worldbuilder, however their stats are all just placeholders. This one also seems to have given rise to the Sentry Drone in the expansion. 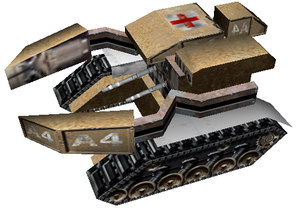 Same here. This one would heal stuff, presumably, but went unused due to the Ambulance. 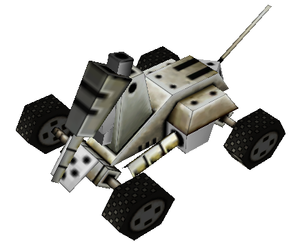 Now this one is different. It does not use the early gold skin, because it was eventually revived as a possible replacement for the Emergency Repair for America. However it was never used in that role. 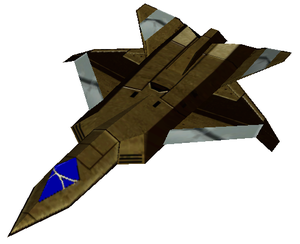 An alternate, more boxy version of the Raptor, again using the gold skin. It's easy to see why that one didn't make it. 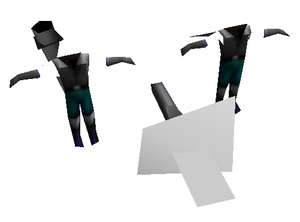 Originally, instead of a missile defender there was a two-man missile team that America could build. It was removed for unknown reasons. 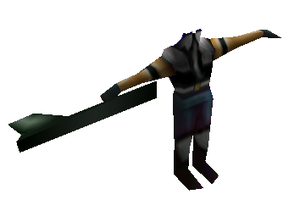 A SEAL was planned for America, like the Navy SEAL from Red Alert 2. The problem with it is that it did not quite fit into the faction since everything it did was already covered by other American infantry. 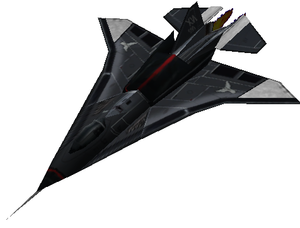 A black Hypersonic Aurora was planned for Airforce General. Like the Aurora Alpha, it would release a fuel-air bomb, which has an absolutely insane one thousand damage (this would make it one of the most powerful weapons in the entire game). It has a model, voice set and a selection picture all done, but for one reason or another it was not implemented in the game.

Some of the Aurora icons and model were mixed up just before the game's release. In the final game, the Superweapons General is the one that uses the black Aurora model for the Aurora Alpha bomber. However, the Alpha's icon is that of a white Aurora with a grey stripe pattern, which is yet another Aurora model that went unused in the final game.

It seems that Airforce General was supposed to be able to build individual Battle Drones. It would certainly fit him, but at the same time there's no point in it since the weapon of the Battle Drone is very weak and they're quite fragile. This selection picture was intended for the Battle Drone, but is never used.

There are two selection pictures of the B2 Carpet Bombing special power in the game, but only the right one is used. The left one is probably unused because you can't really recognize the aircraft in that picture due to the side view.

Surprisingly, despite being the Laser General he has only one real laser unit at his disposal (the Laser Crusader). However, unused voices suggest there were way more laser units planned which were never implemented. Such units include the Laser Ranger, the Laser Humvee (with upgradable Laser Gun), the Laser Paladin, the Laser Stealth Fighter, the Laser Comanche, and even the hero unit Colonel Burton was supposed to come in a laser variety. None of these can be found in the game due to time constraints.

The Laser Cannon was a planned version of the Particle Cannon for Laser General. It would be significantly weaker than the Particle Cannon, but have a longer duration time and be available much earlier in the game (after the Airfield). It's all finished and can be placed with the map editor, so one wonders why it was never used.

Fitting in with the overall laser theme, the Fire Base of Laser General was supposed to get a laser guided attack, just like the Missile Defender. It was never implemented for whatever reason. 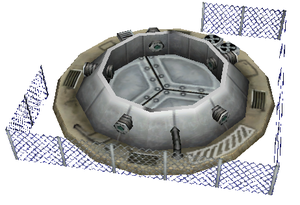 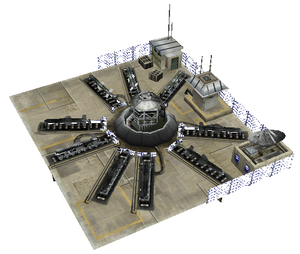 The Cruise Missile Silo is partially finished and can be placed on maps with the map editor, however it has certain bugs, such as the missile launching sideways, and the building magically morphing back into the Chinese Nuclear Missile Silo at nighttime. Of the Tomahawk Storm, only the model and the selection picture remains.

The EMP Patriot was supposed to get a defense emitter at close range which mainly protected against infantry which came close to the missile battery (so it would not try to attack the infantry and disable itself in the process). A design change led to its removal. 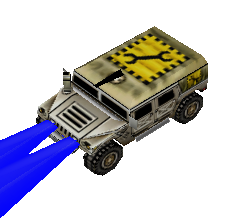 The Repair Vehicle was a planned replacement for the Ambulance for Superweapon General. It would repair vehicles near it, instead of infantry. It was probably intended to work together with the Support Stealth Fighter below, but was scrapped. Instead, all Ambulances were made to heal both infantry and vehicles.

A special "support" Stealth Fighter was planned for the Superweapon General. It would heal infantry beneath it in a similar manner to the Ambulance, and was probably supposed to complement the Repair Vehicle above. However, only the voice set remains.

The Battle Drone of Superweapon General was supposed to get a Point Defense Laser to protect its master from incoming missiles and to help combat infantry. It is present in the code, but never used in the game.