Some mission maps come with multiple versions of itself, the duplicates titled with CINE, INTRO or END. Presumably, they would have been used to keep the introduction and ending cinematic separate from the actual map where the battle is fought. The problem with this is that it would have required loading the maps during the cinematic, which take very long to load. Most interesting, however, is that these unused maps actually originate from early versions of the mission maps and have not been updated since. Therefore, canned plans and other interesting ideas which have been removed from the normal mission map can still be found here.

The early version of the map is titled CINE.

While you can garrison the radio station in the final version, it's only a secondary objective, and you can beat the mission perfectly fine without doing so. In the early version, however, garrisoning the radio station appears to have been a primary objective, possibly for calling in the B2 bomber. The obvious problem with this is that you're screwed if you do not bring any infantry to the Baikonur base, which was probably the reason this was turned into a secondary objective.

There are two different versions, titled INTRO and INTRO_NS. The former appears to be an earlier version, as it is completely missing the introduction scene, but they are rather similar. For both, the second part of the mission involving building a base and destroying the GLA either originally was not part of the mission, or was simply not yet coded in.

This map has no less than five different versions! They're titled CINE, END, END1, INTRO and MID_CINE. Note however that the MID_CINE map is blank apart from a few GLA buildings, so it contains nothing of interest.

This map is called INTRO.

This map is called END.

This map is called END1.

The map is titled CINE. 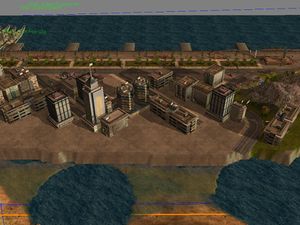 Unused part of the ending scene.

The map is titled INTRO.

This version exists twice, with the titles CINE and END respectively.

In the final game, you automatically start with Cash Bounty. It seems like this was not the case originally. It was probably changed precisely because of these money issues, as you won't find a supply pile, let alone workers until you reach the abandoned base, yet you will need to build defensive forces to protect against the airstrikes.

The entire text file included with this map is commented out and goes unused. Most of it is just an early version of the military briefings you normally get throughout the mission, but there are some surprising changes there.

Apparently, if all the POWs were killed you would not receive any help from the GLA Terror Cell. In the final version, they are more helpful and will assist you in avenging their deaths.

This string speaks for itself.

This version is titled INTRO.

Just by looking at the unused map previews, it becomes obvious that the map originally looked much different. Most importantly, the American base to the east cannot be directly accessed originally because of the body of water. There are also no chokepoints at the entrance to the American base at the north.

There is also a dam in the early map, but whether it's only there for design purposes or whether America was actually meant to be able to flood the map is uncertain.

The Mountain Guns map has some coding which adds a carpet bombing ability to the TV station. This does nothing in the game, because the TV station is not present on the map. However, this coding, together with the awkward map layout (it is the only five-player map in the entire game) suggests it was originally planned for the campaign, and only later converted into a multiplayer map. 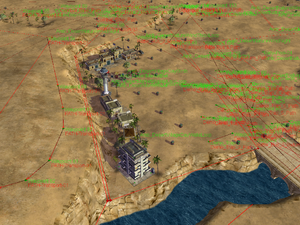 The map, viewed in Worldbuilder.

A map exists in the game files which was intended to be the Generals Challenge map of Demolitions General, a general which does not appear in Generals Challenge in the final game. It is a desert map with millions of Demo Traps scattered all over the place, which fits the nature of Demo General perfectly. There are two bases to his disposal, and some tech buildings here and there, but otherwise the map is seemingly bland, and the cliffs don't have the correct texture blends which suggests that the map is far from complete.

Looking at the contents of the map and its associated scripts, it's obvious that this was originally intended to be a mission for the Generals campaign. There is an American Command Center and a construction dozer at the player's starting point, and the build list features none of the innovations introduced with the expansion pack. The GLA enemy is to a large extent nonfunctional, since the mission attempts to call nonexistent units prefixed with "GC_Demo", which would have probably been the counterparts to the GC_Chem and GC_Slth units which appear in the expansion pack campaign.

The file USA05_EndsConflict.map contains an American mission which does not appear in the game whatsoever! You start out in the bottom left corner, and judging from the unfinished scripts, had to hunt the GLA Leader across the map.

There are four boundaries on the map. Initally, you could only see the left side. After destroying the palace at the top, the map would expand to show part of the city on the right. This city doesn't appear to be entirely finished as the top half is very empty. Destroying the radio station would expand the map to show the rest of the city. Here, you had to destroy a chemical plant held by the GLA at the bottom right. After doing that, the rest of the map would be shown, and your job here was to destroy the GLA bunker at the top right. It is not known what the next objective, if any, would be, since the scripts seem to stop here.

There is an intro map that goes with this mission, called USA05_EndsConflict_INTRO.map. The intro shows Humvees and Technicals chasing each other across a city. More interestingly, this map uses special objects which were coded entirely for this mission, but ultimately never used.

Another file called USA07_TaskForces.map appears to be a modified version of the sixth American mission from Generals, where you had to fight against both the Chinese and GLA. 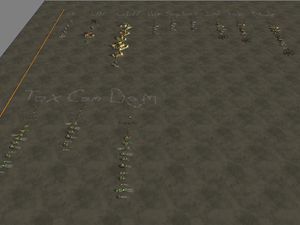 This is a test map containing all the faction units in the game. It was probably used to check the correct appearance of all units, since it cannot actually be loaded in the game and can only be viewed in the map editor. 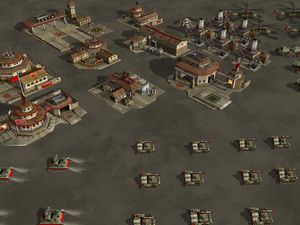 This giant map contains all buildings and units of all in-game factions. It also contains a bunch of salvage crates for checking out all the upgrades of the GLA units. 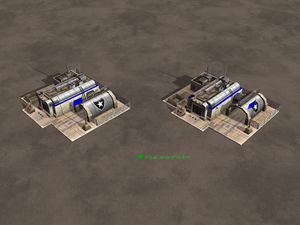 No idea. Only contains two American Command Centers. It was apparently used to demonstrate a bug.

Retrieved from "https://tcrf.net/index.php?title=Command_%26_Conquer:_Generals/Unused_content_in_the_expansion/Missions_and_maps&oldid=685932"
Categories:
Cleanup > To do
Subpages