This is a sub-page of Command & Conquer: Red Alert 2 (Windows).

The Apache Chopper uses a Harpy model of Tiberian Sun, one of the most complete units that was discarded.
This unit does not have sounds. It costs $1000 and has attacks only at the ground. 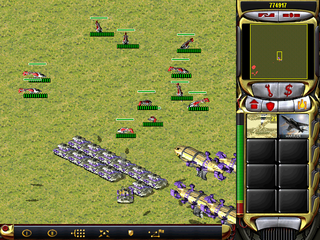 Hack to make MultiMissile work!
It has no sounds, you can't attack any targets. It costs $300 and is named Chem Spray Infantry. It has no graphics, so it is invisible.

This unit is used to make certain weapons work, by declaring them on a unit, even if it's unused, the game will read and load the relevant section, in this instance, it makes the Nuclear Missile work, and holds a "cluster" weapon for an unused Elite V3 Rocket weapon, with the rocket exploding above the target unit, and 9 cluster missiles raining down on the target unit and the 8 tiles surrounding it. 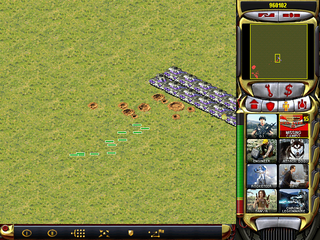 It is much like the Cargo Plane, but is named Transport Plane, it doesn't use paratroopers main weapon. The model is the same as Cargo Plane.

It is a unused unit called Placeholder. It has no sound and costs $2000 and shoots laser. It uses the same model of Rhino Tank and speed of the Prism Tank. Much like the Weedguy above, this unit is to make stuff work, this unit allows the Prism tank and Elite Tesla Trooper weapons to "Fragment" and hit other targets 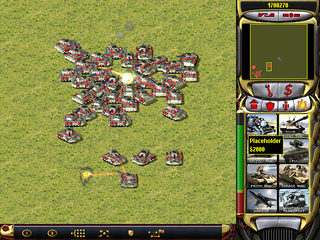 Uses the same model as the Aircraft Carrier, but with some modifications, it would be built for the Americans, does not have sound, it costs $2500. This ship would be called Aircraft Carrier Nimitz, has 4 spawns.

Uses the same model as the Dreadnought, but with some modifications, it would be built for the Russians, does not have sound, it costs $2500. This ship would be called Dreadnought +3, has regeneration missiles 25% better than normal.

This helicopter would be used by the Cubans, it costs $1000 and can carry 10 passengers. 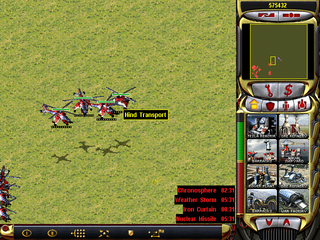 This tank would be used by the Iraqis, it costs $600, It is lightweight, inexpensive and very fast. 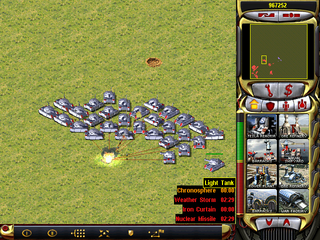 This tank would be used by the Koreans, it costs $750, It is a long-distance artillery and cause enough damage to anything. 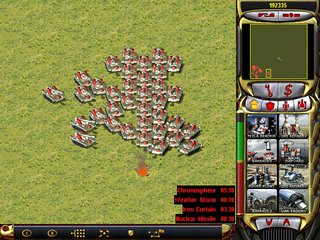