From The Cutting Room Floor
(Redirected from Command and Conquer (DOS, Windows))
Jump to navigation Jump to search

Command & Conquer is unarguably one of the most innovative real-time strategy games, introducing many features which are now commonplace in modern games of this genre. It was originally released for DOS, then later ported to the Windows 95 engine used by Red Alert as Command & Conquer Gold, which allows the game to be played at twice the resolution.

The DOS version has an undocumented parameter: -ATTRACT. If the game is started with this parameter, it will start a playback demo after the game is kept idle on the title screen for one minute. This playback demo is very obviously unfinished, as it crashes after 45 seconds of gameplay. The demo is read off the otherwise unused RECORD.BIN file, stored inside the TRANSIT.MIX file, and by truncating this file, it is possible to have the demo finish. It's very likely that the developers simply ran out of time and were forced to ditch this feature.

The parameter was carried over to the Windows 95 version as well. However, it crashes right away as soon as it attempts to load the demo.

The hidden dialog in C&C95, enabled through hacking

This excerpt from the game's strings file reveals a number of interesting options:

From research into the exe file, it was revealed that there is a hidden dialog that can be called up in the game which contains these options.

A number of these options, and more, appear as ini keys that can be read from the game's configuration file, conquer.ini, by placing them under the [Options] header in the file. However, the strings to trigger these options were saved as hash values, making the actual input strings a mystery. A number of these (often humorous) strings were later recovered through brute-force methods using a reconstruction of the hashing algorithm. The strings are case insensitive.

The final identified options are:

For the known values, the options would look like this in conquer.ini: (ignoring the existing normal options already in that file)

Two tools were created to enable these options by changing bytes in the exe file:

Note that in the unofficial v1.06 patch for C&C95, the options are all changed to simple true/false boolean switches, removing all need for the secret codes. Some of the codes that could interfere with multiplayer games were also moved to an internal rules.ini file. 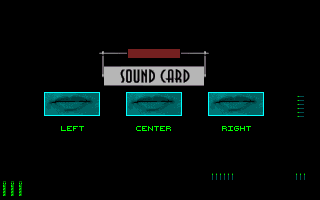 The MS-DOS installation program for Command & Conquer normally allows players to only test and use monaural sound for digital audio playback. By finding certain hex strings from the audio driver file (HMIDRV.386) and placing them in the game's configuration (CONQUER.INI), it's actually possible to hear positional left-and-right sound effects in this version of the game.

Note: This has no effect on the music which, like the sound effects, is all encoded in 16-bit mono.

Besides the aforementioned remixes that can be enabled through the settings file, several music tracks are flagged to never appear in the Sound Controls menu's playlist. Two of these tracks are the score screen and mission selection screen themes; omitting them makes sense; but the following tracks are also omitted:

Enemies To Be Feared

Enemies To Be Feared (Remix)

"Heartbreak" and "Reaching Out" were supposed to be enabled by triggering the hidden remix music option, but because the game's preliminary scan to check which music files exist only looks at the non-remix versions, they never appeared in the playlist even with the option enabled.

Two more unused (and unreferenced) tracks in the game files were confirmed by Westwood's composer Frank Klepacki as unused side-specific score screen and mission selection screen music for the Nod side. The fan-made v1.06 patch for the Windows 95 version of the game implemented that side-specific score and map music logic, enabling the unused music.

A short "popping" or "whooshing" sound effect is supposed to be played when a grenadier throws a grenade. The game tries to play toss, but the sound's filename is actually toss1.

EVA saying "left," "center," and "right," found in SETUP.MIX. While "center" is used by the setup program to test the digital audio, "left" and "right" go completely unused due to how the program works. Those clips would likely be heard solely on the left or right speaker, respectively, when played. 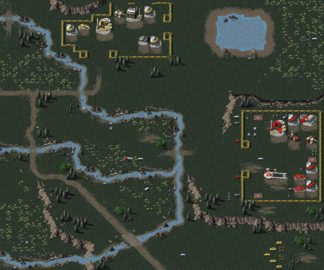 GDI mission 5eb is reported to be unreachable. In particular, the mission selection for this stage was supposed to only be available if choosing the eastern Belarus area to recover the stolen crate. Despite showing two arrows, they both lead to the SCG05EA mission, rather than one of them leading to SCG05EB.

The mission appears to be fully playable, with enemies attempting to attack the player's base from both entrances, as well as attempting to sneak around behind the GDI base. Furthermore, this bug does not appear in the console ports of the game, where the mission is playable as it should be.

The mission was reactivated in the unofficial 1.06 patch for the game by replacing a mission which was a 99% duplicate of another mission choice.

Various Command & Conquer maps have terrain surrounding the mission area. Usually, this off-map terrain is a wall of mountains with a gap used to channel incoming reinforcements, which is used by the engine. Sometimes, there are some things present beyond a simple misalignment.

GDI Mission 1 uses a smaller layout of Mission 2, keeping features that were present off the map. It has slight differences - Mission 1 has a tiberium patch near the road, and also has the road branch to the east then north, coinciding with Mission 2's reinforcement gap.

GDI Mission 4, variant WA, has additional roads to the south of the map, as if the southern route was intended to be longer.

GDI Mission 9 had the southern half of the map extend a bit further, including a few trees.

NOD Mission 1 has signs of being larger than originally planned, with the road extending to the south. There's additional cliffs to the left and right of the road, being cut off as soon as they enter the map. Additionally, there's spare trees and rocks dotted to the far south.

NOD Mission 2 has a long road circling beyond the south and east edges of the map. There's also a river in the south-west corner.

NOD Mission 3b's border is a copy-paste job of NOD Mission 3a's border, the only difference is a river being added.

NOD Mission 6B has some water to the west of the north-west corner.

NOD Mission 13A: Triggers "ion1" and "ion2" call an Ion Cannon strike if something specific is attacked or destroyed. No units or buildings have been applied to these two triggers, thus they will never activate. This otherwise would be similar to the same Ion Cannon method used in Mission 12, where two Ion Cannon strikes are defined using similar triggers.

NOD Mission 13B: Trigger "yyyy" reinforces the player with an MCV and two light tanks, when the eastern outpost has its advanced guard tower, guard tower, and power plant are destroyed. For the player to activate the first trigger, this requires capturing a chinook, transporting infantry units (five at a time), sending them against an advanced guard tower (which outranges and shreds infantry), all before a timed event occurs (trigger "mcv"). This timed event reinforces the player with units which walk over trigger "dely" as they enter the map. Trigger "dely" disables "yyyy".

The missions contain ini sections for placing [Units], [Structures] and [Infantry] on a map, but are lacking one for air units. Deactivated code for reading an [Aircraft] section exists inside the game, but when it is reactivated it doesn't work correctly; the aircraft spawn in the air, and leave an impassable spot on the ground below their spawn location which will never go away. This bug is most likely caused by the air reinforcements mechanism, which lets aircraft fly in from the border of the map, requiring them to be spawned in the air by default.

Note that several missions contain transport helicopters that appear to be placed on the map, but these are actually reinforced by triggers at the start of the mission; they fly in from the edge of the map and land on the scripted spots.

Another undocumented parameter, -X, was used by the developers to enable the game's debug modes. The only parameter still recognized by the game, however, is -XQ, which disables all sound and music output.

It was discovered in Red Alert that there is a command line parameter "EDITOR" which causes the game to start in a strange mode which loads the first game mission automatically on startup, where no sidebar is drawn, where projectiles don't spawn (and thus no damage can be done by anything), and where the mouse controls for commanding units are disabled (though the keyboard commands still work). This was theorized to be the defunct remains of a map editor built into the game engine. In Red Alert, notably, this code was split off into the separate EDDOS and EDWIN editors.

Command & Conquer 1 does not contain the actual "EDITOR" command line parameter, but the game can be manipulated to launch in that mode too. The editor mode in C&C1 appears to be exactly as defunct as the one in RA1, though.