Commando is the quasi-predecessor to Bionic Commando. You are Super Joe, a super-soldier taxed with fighting an opposing army by himself. Manly!

Alternate copyright strings can be found in each version starting at 7730 in memory.

These strings match the custom copyright messages used by Data East in their games, or rather, match their openings (they would be followed by STOP centered on the screen and then a longer, legalese block of text). The actual game uses a very different and more standard copyright string:

In fact, even the Data East-distributed US version uses the Capcom message! 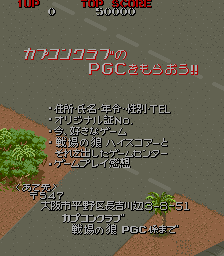 The Japanese version has an extra screen in Attract Mode advertising a PGC (Play Game Card).

Like most early Capcom games, the number of characters per name was shortened from 10 to 3.

The text giving information on extra lives has a typo in all non-U.S. versions: An erroneous zero.

Additionally, there's a bug in the Japanese version's sound driver that mutes one of the instruments on the Last Area Clear track. This was fixed in all other versions. 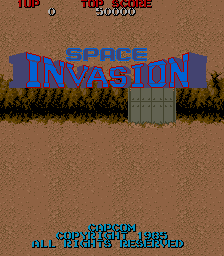 A special version of the game called Space Invasion was made specifically for the West German market in order to circumvent German laws at the time about killing people in media.

This is based on the World version of the game, as evidenced by the identical unused copyright string at 7730.

This version replaces all the graphics along with the unused ones of the human soldiers with aliens. Or robots. Possibly alien robots.

There's even an alternate design with horns supposed to replace the latter commanders, but just like them it never appears in the game.

(In both animations of the green variant, there's a frame containing a right elbow of the original design as a leftover)