Commando is an overhead run-and-gun that has you mowing down an infinite number of enemy soldiers in the jungle. It's a port of the arcade game of the same name. It's also probably a better Rambo game than Rambo. 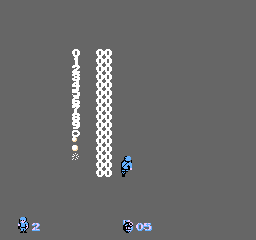 In the game, press Select on controller 1 to freeze the game. (Character movement is still possible in this mode.) Press any of the directional keys on controller 2 to bring up the menu. Press Up and Down on controller 2 to move up and down the list, Left and Right to adjust the value. (The in-game font does not include letters for "A" through "F" and will display junk characters in their place.)

Press Select on controller 1 again to close the menu with changes intact. The palette will eventually reset as the screen is scrolled.

Even though you're invulnerable to enemies and their attacks, you can still die from falling into a pit, water, or not escaping a gas room in time. If you get a game over this way, you can just do steps 3 and 4 to re-enable the cheat ― no need to reenter the controller 2 code.

Additionally, in the Japanese version of the ROM, there's several more disabled cheat codes. Quoting CaH4e3's page: Another cheat Left, B, B, Right, A, Up is disabled by setting some wrong data in the code sequence, so it cannot be verified correctly, but there is not any code that uses the according cheat flag too. [...] Another cheat sequence present in the ROM but not checked by any part of the code is Left, Left, Up, B, Up, A, Right, Right, Right."

AEVKEKNA' enables some bad cheat. Use this code, then after game over after returning to title screen press on second controller Left, B, B, Right, select 1P or 2P continue mode at tile menu then hold A on first controller and press Start. The game will hang up.

This message is found only in the US version at PRG ROM address 1CBEC. It talks about not being able to meet Mamiko Takai, a then-popular singer, at a handshake party ― a party where you shake hands with the celebrity. 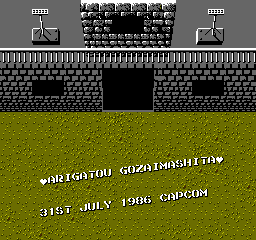 This message is found only in the US version at PRG ROM address 1F400. It mentions beating the game with 3 lives and 24 grenades remaining, which will display a secret message after the ending (pictured right). (Note: Line breaks have been added for readability.)

These credits are found at 1FF90 in both the US and JP versions.

M.K is Masamitsu Kobayashi, KURO is Masahiko Kurokawa, SAKA is Yoshihiro Sakaguchi, and TAMA is Tamayo Kawamoto. More credits can be found in other Capcom games by the same programmer, such as Higemaru Makaijima.

These dates are found at 1FFF0 in both the US and JP versions. They are different for both.

In the Japanese version, holding Select while moving will cause your character to walk backwards. However, they will still shoot in the direction they are moving. Perhaps this may be an unfinished implementation of a sort of strafing mechanic.