In Creatures, Clyde Radcliffe exterminates all the unfriendly, repulsive, earth-ridden slime.
The game's also not to be confused with the much later identically named but totally different Creatures on PC. 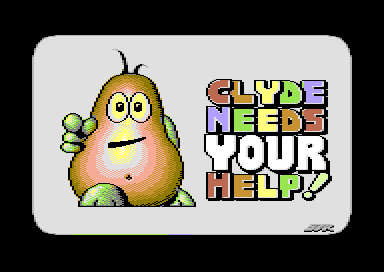 This picture is a hidden easter egg in both versions of the game. Instructions to view:

Disk
Insert side 1 of the disk.
Load the file "UNCLE CLYDE" (LOAD"UNCLE CLYDE",8,1 and then RUN)

Tape
Load the game as normal on Side A of the tape. Once prompted to insert side B, don't do this, instead stop the tape and reset the computer.
From here load the tape again (SHIFT + RUN/STOP). Note most online .tap versions of the game are truncated and are missing this file.

There is an unused extra life graphic loaded into RAM. In the final game extra lives just appear as the normal Clyde sprite, without the "1-UP" text above.

The file "MENU" on side A of the disk version has the following hidden text in it:

The file "LA" on side B of the disk version has the following hidden text in it: