Creepy Castle is a side scrolling RPG where you play as a bunch of bugs trying to save the world from something, which always involves the Possessor for some reason, even when he has nothing to do with what's happening.

Charachter ID 1 belongs to Bee, He is completely functional, and can be used to beat any of the freeplay scenarios if edited in. Because he's a boss in scenario 1, not all of his sprites ended up unused, but most of them did.

Charachter ID 4 belongs to this little green guy called Moonson (not to be confused with Monsoon). He's a charachter from a cut scenario called Brotherhood, that ended up bein replaced with Depth, trying to use him in a battle will cause the game to crash, as the code that loads the battle portraits doesn't know what to do with him (and also because he doesn't have a battle portrait).

He also has a special attack, which doesn't seem to have an animation script, so it freezes the game if you try to use it.

Before there was a dynamic inventory slot to battle and act, there used to be two seperate items to do that, these hands are the leftover act item, one for each charachter color (exept green).

A cross, it was most likely either ment to be the item you'd use to kill vampires with insted of the garlic, or an icon for interacting with a shrine.

"Ant Queen is in your party!"

It's the Ant Queen herself! It's exact use is unknown, but some of the leftover code suggests that it was ment to be used in the escape sequence as a trigger to make her start following you.

Battle icons for Bee and Moonson, because you can't play as them, you can't see them in normal gameplay.

There is also this icon which isn't linked to any charachter, but resembles a lot one of the sprites used in Ant Queen's special attack.

These are the special attacks for Bee and Moonson, because you can't play as them, you can't use them in normal gameplay.

The Gauntlet is an unfinished key item that can be used to pick up and move a (also unused) pushable block, you can't move the block trough stairs, and can't fall down while holding it.

A white orb with a question mark on it, it's unkown what it would've been used for.

This hearts are healing items used in old pre-release versions of the game instead of food. The Red Heart is the 2HP food equivalent, the Yellow Heart is the 4HP food, and the White Heart is the 9HP food.

The Cross Heart, however, has no equivalent in the final game, it functions like the red heart, exept it only works while standing in a shrine. (which makes it pretty useless)

Tom is a NPC found out-of-bound in the IUS Site, you can see him on the Kickstarter trailer in the same place you find Crackle. If you interact with him, he has this to say to you:

A grey florian that is found out-of-bounds near the mining area that only says "..." when interacted with, given the fact the planet is being mined out of it's life, this florian is probably either dead or dying.

This... thing is a background sprite that is found out-of-bounds in the main map of Ghostly Mysteries near the area you fall to get to Plague Knight's boss fight.

These sprites were ment to appear on the game over screen, the most intresting thing about them is the pink charachter in the middle one, which seems to be Krystal's old persona Mingo[2].

A statue from the Depth interation of the charachters.

A block modeled after the boss Asura, considering the fact that it has a deactivated version, it seems like this would've been some sort of roadblock that would be removed by beating him.

Most of them are just blacked out versions of regular sprites.

However, some of them appear to be older iterations of certain characters:

And there's also these two that don't resemble anyone form the final game:

Related to the stuff Possessor spawns during Possessed Darking's fight.

Portraits for a Cilrag, the Meteor and a blank one. 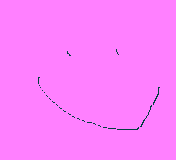 A sprite that should've appear with the player death sparkle.

Very old triggers, evidenced by the mention of Pumpkid and Skullboy.

An icon ment to be used for Butterfly's bestiary entry, because there's no fight against her, you can't unlock her entry.

The pushable blocks that you can use the glaunted on.

It functions as a NPC, the only instance of it in the game is placed out-of-bound near the IUS teleporter, and it has this to say:

bgm_optionalboss (Off The Beaten Path)

This was ment to be played for optional non-cameo bosses, but the only boss that fits this category (Dopplebugger) plays "Untrue Reality" instead.