Crisis Force is a very impressive vertically-scrolling shooter from Konami. Unfortunately, it was never released outside of Japan, likely because it was a fairly late release that used Konami's custom VRC4 chip. 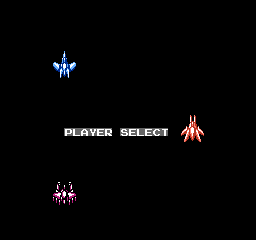 It seems that the game intended to have some sort of "player selection menu" allowing you to select the ship type for both players, early in the development stage. There is some unused piece of code in bank $00 at address $99CC for what appears to be some very early version of such a selection routine. It doesn't even have a proper palette setup and even if you hack it back into the game using the Game Genie codes UEKYPONA + KKKYGOIS + OOKYIOKU (enter the options menu at the title screen), you can't see anything unless you modify the game's palette using the debugger.

If you do so, you will see something like the picture above and to the left. There are two ship sprites for the first player to the left, and one ship sprite for the second player to the right. You can change the selected ship by pressing Up / Down on either Controller. Pressing A or B will "apply" the setting and the sprites will slowly stop blinking. But since the routine is quite rudimentary (and actually nothing is known where and how to properly call it), the routine will continue the selection from the beginning.

The only used portion of this set of various firing animations is the vertical one to the left, used in the first instance of the final boss fire-breathing animation. The rest of it is never used during the game.

"MSTR" means it's the "master" version of the game, and the numbers represent the date. So, this build was compiled on July 1, 1991.

As with most of the games Konami has published after 1990, this game features a copy-protection routine. The game checks for the character with code $29 (copyright symbol, "©") in VRAM at the certain position of the title screen, and sets a flag if the test fails. If the flag is set, the game will always loop back to level 1 when you finish level 2.