For its time, Crysis was probably the most graphically impressive game. It was successful enough to spawn a spin off, as well as two sequels. 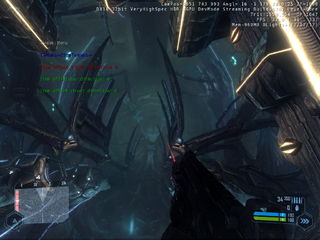 Starting the game up through the command line prompt and typing in -DEVMODE when booting up the game will start up a developer's mode.

While in this mode, icons will appear on the top left corner of the screen, showing when the game is saving data.

An .xls file is hidden inside english.pak, as does Warhead. This isn't too different from the final version, but there are some small changes. Notably, there are references to Chinese soldiers, who were changed to Korean soldiers to avoid a ban in China.

A slightly different piece of dialogue from when Nomad gets knocked out in the opening.

A conversation between a female scientist, presumably Helena, and a Korean soldier.