Crystalis is a top-down action RPG in which players assume the role of a character named SNK (if the player doesn't assign him a name, that is) who is tasked with collecting four elemental crystals swords to save the world.

During the game, press B on Controller 2.

During the game hold A + B on Controller 1, then by pressing A on Controller 2 you can cycle through 16 predefined places of the game.

In the Japanese version, hold A + B on Controller 1, then power off and on again the console (this doesn't work if you just reset the console).

Now, during the game, press Start to enter the status screen. On Controller 2, press A to enable the super fast movement or any D-Pad button to enable the invulnerability and add all items, equipment and add an extra 255 MP.

In the US version this feature is disabled, but you still can re-enable it using the Game Genie code XTKLVYAV.

The copyright date in Crystalis has been changed from 1989 to 1990. The copyright information in USA version now includes "LICENSED BY NINTENDO OF AMERICA INC.". The cursor has also been recolored.

In the Japanese version only, enable "Invulnerability, All Items, Free Walk" cheat as described above, then just beat the game.

Do not power off the console after that! Start a new game or continue a previously played one. Start any conversation in town with any character with A held on controller 1, then one of four secret messages from the developers will be displayed. Every time you start a new conversation, the message changes. After the 4th message, they will repeat. 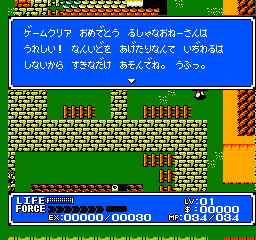 "Congratulations! You actually beat the game!You've made Rushana a very happy girl! I don't even mind if you fiddle around with the levels and stuff! Heh heh!" 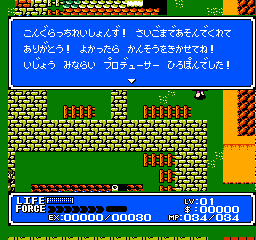 "Yes, congratulations! Thanks for playing to the end! Please let us know what you thought, okay? That's all from Hiropon, your producer in training!" 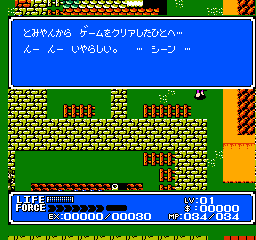 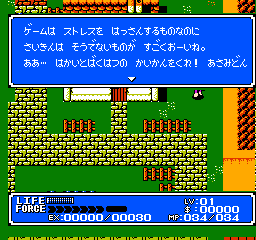 "Games are supposed to be a good way to release stress, but lots of games these days do anything BUT that! Ahh, just give me some destruction and explosions! (Asami Don)" 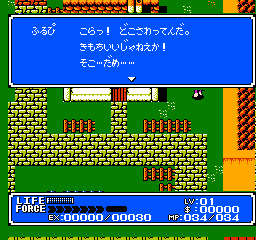 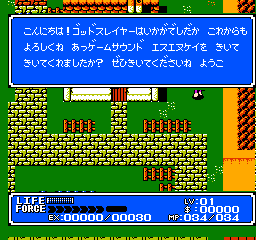 "Oh, hi there! Did you enjoy God Slayer? Keep supporting us in the future! Oh, and listen to SNK's game soundtracks! Have you listened to them already? We sure hope so! (Yoko)" 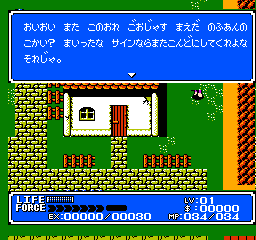 "Hey, hey! Are you another fan of me, Gorgeous Maeda? I'll give you my signature later, alright!? See ya!" 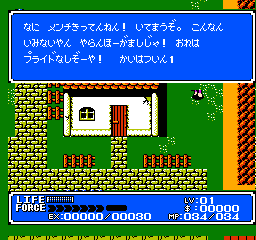 "What the hell are you starin' at!? Stop wastin' my time. You're shameless! -Developer 1" 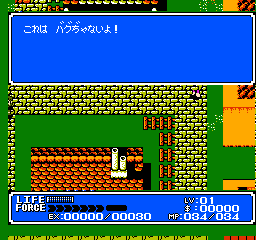 The flashing in the opening has been toned down.