Inspired by 1930s animation (specifically the works of Max Fleischer, Walt Disney and Ub Iwerks) and tough-as-nails platformers such as Contra, Cuphead is a run 'n gun platformer/boss rush game in which you play as two brothers who have to collect soul contracts from various people, or else the Devil will take their heads.

Oh, and they're also walking drinkware.

Known for being just as hard, if not harder, than the games it was inspired by.

There is a debug console in the game that can be re-enabled with a patch. This console serves several purposes such as toggling invincibility, boosting the player's damage and accessing the level select among other things. Place the files into the same folder as the game executable and then press F5 while on the map or in a level to open it. 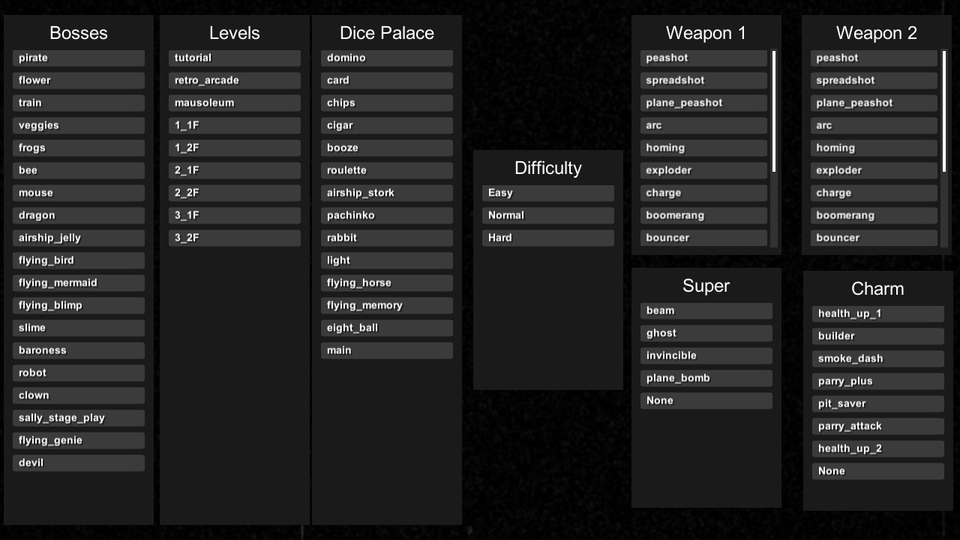 A fully functional level select can be accessed from the debug console with the command scene.select. Difficulty, Weapons, Super, and Charm can be changed at will until a level is chosen. Clicking on a level will load it after a few moments. As of the v1.1.4 update, clicking on airship_jely, retro_arcade, airship_stork, pachinko, or light will softlock the game due to their assets having been removed; this could mean that all of these aforementioned levels may return as part of The Delicious Last Course.

A completely unique theme can be found under the name of bgm_title_theme.fsb in the files. It's a faster, more upbeat rendition, and the last "Cuphead" towards the end sounds identical to the fanfare that plays on the overworld once you beat a level. It seems to have been composed during an early stage of development, as the lyrics describe a considerably different plot than the final game. It possibly was composed when the game was still going to be simply a boss rush, judging by the tournament aspect.

An early version of Floral Fury.

This file contains the main opening song, but slowed down to roughly 83% and reversed.

This is the same audio from earlier but pitched up by 20% . 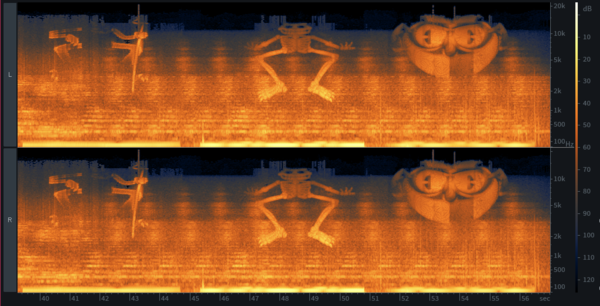 …as encoded spectrogram waves depicting the Devil's boss fight partially drown out the looping noise. Within the file, sliding sounds like those of chips in a casino (much like the Devil's Casino) can be heard in tandem with the imagery forming. These images are all taken from the fight in his first phase (with the middle being cut off), his transition phase, and his second phase.

This was likely intended to be used on the title screen after agreeing to join the Devil's side at the end of the game. However, the current version of the game just reverses the title theme without adding any extra effects.

Note: All of these names are merely guesses based on the filenames. 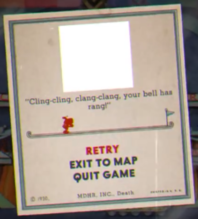 "Cling-cling, clang-clang, your bell has rang!"

A boss named "Pachi-Pachi", labeled and designed as a Pachinko machine, can be selected in the game's debug menu. The boss' only attack is a non-animated flame that comes out of its head. Throughout the fight, blue/black colored balls fall; though not colored the same way as other parryable objects, the black balls can be parried. Upon defeat, it will perform a seemingly complete death animation, and take you back to the King Dice fight. This boss has a death quote, but the boss picture is missing. 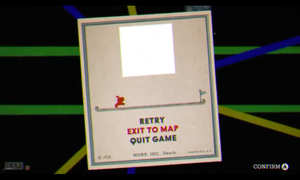 Also found in the debug menu is a boss called "Light". The boss is basically a crudely drawn thing and has no attacks. When the battle begins, cutouts of Jared Moldenhauer's head fly in a straight angle. It also lacks a death quote. 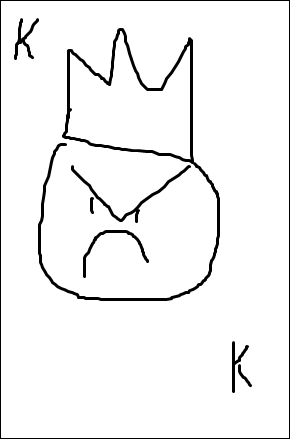 This boss was apparently cut early, as all of the assets are crudely-drawn placeholders, and it lacks a hitbox for the player to damage them.

The fight uses a falling block matching-game gimmick: blocks would fall down in a grid, above where the player is standing. If unmatched pieces drop onto the highest point of the grid, a spiked platform above the player would lower to allow the next set to land on the highest piece, no more or less than a single space will always be available. The platform could be raised, either by matching 3 or more pieces horizontally or vertically to lower the highest piece, or clear all the blocks, if the highest piece exceeds the grid's set maximum size.

This test level uses a pixel-art grass platform, and features cutouts of developer Jared Moldenhauer's head flying in from left and right. There is also a white platform at the bottom of the room.

The quote used upon death, "You are not a warrior, you're a beginner" is a reference to Street Fighter II, where it is Sagat's victory quote. The same message is shown if you somehow die on the tutorial, such as by using the unused Ranger weapon.

This shows an early version of the level Dramatic Fanatic. In this version of the level, the transition to phase 2 is different; instead of Sally riding with her husband, the husband dies by the chandelier. With it being unfinished, the second phase shows us at a nunnery instead of a nursery in the final game, and instead of babies throwing bottles, it's replaced by nuns throwing something; also the pope is there instead of the husband in the bushes. In the third phase, the husband comes back, but this time in his god form; he would throw berries at the player.

This version of Dramatic Fanatic became fully playable in the 1.2 patch that released on April 20th 2019. The nuns will throw rulers and the babies have been moved to the phase with the husband's god form. Not much has changed.

There are four weapons and one charm that are unused in the game. These unused items can be used using the level select.

This weapon flies in an arc, sticks to the ground upon impact, grows after a short moment, and explodes when any enemy touches it. This weapon has 3 different damage values, dealing the most if it explodes midair, lowest when it first lands, and a medium amount after it has grown while on the ground. The EX attack fires a quick shot in a downward arc, sticks to the first surface it touches, and explodes after a few moments.

It uses the placeholder EX move sound from earlier builds and the art assets that are used for the chaser.

This weapon appears in early videos of the game with somewhat finished assets, though the assets got removed in the final version of the game, so a simple filled circle acts as a placeholder instead. Though sometimes referred to as "Exploder" in the files, "Ranger" fits better since the weapon's damage increases depending on how far it travels.

The EX attack will fire a fast-moving projectile in a straight line until it has hit something, which causes it to launch another shot backwards toward the player, damaging the player if it manages to hit them.

This weapon is similar to the spreadshot weapon in the game, but can be more focused in a certain direction if the player uses the aim button while shooting. This weapon is the only one that can pass through objects to hit an enemy, though compared to all the other weapons in the game it's one of the weakest ones.

This weapon was cut before an EX version was programmed.

This weapon is exclusive to the plane fights, similar to the first weapon in the game, when using a card, multiple shoot out in a circular angle similar to the earlier builts of the default shooter's EX. This weapon is somewhat weak, but it can build up EX cards quickly.

This charm prevents damage from pits, and increases invincibility frames. Most likely removed due to being overpowered. Interestingly, this charm got nerfed in the v1.1.3 update.