Remember when Konami thought removing the difficulty scales and all songs prior to this release was a good idea? 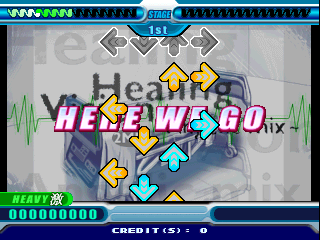 The Solo mode, which was a feature in some versions of Dance Dance Revolution 4thMIX and 4thMix PLUS, is still in the game's coding, and can be enabled with the following MAME cheat:

Inside of the folder data\lang\japa, which contains some interface graphics, are the assets from Dance Dance Revolution 5thMIX's How To Play screen, which are never displayed.

A shoshinsha mark graphic, found within the graphics in data\gpct\select\mslob_25.cmt. It was possibly intended to be displayed in songs with a rating of 2 or lower in Basic, as is in Dance Dance Revolution 5thMIX and its home port.

Two markers that could have been used to denote a highlighted song is a Long Version, despite there being none in the final game.

Within the graphics in data\gpct\dance\gmob_25.cmt is an unused "Freeze!" judgement. It was likely meant to be displayed while holding a Freeze arrow, a gimmick introduced in this release.

These 5thMix-styled Game Over and Danger graphics, found within data\gpct\dance\gover_25.cmt, also don't seem to be used.

This portrait of composer Naoki Maeda, found at data\gpct\demo\btile_25.cmt, doesn't seem to be used, even in the game's operator menu.

These files are all unreferenced.

BPM display graphics - digits, and "bpm" - from DanceDanceRevolution 5thMIX. This can be found at offset 0xE5A800 of GAME.DAT.

Throughout CARD.DAT is leftover data from the final version of Dance Dance Revolution 4thMIX PLUS, including these semi-garbled banners below:

Inside the folder MOV are 11 videos that go uncalled by any of the game's background animation scripts.

JAHASA.SBS
Would only make a proper appearance in Dance Dance Revolution Ultramix.

JANINA.SBS
Would later appear in the next game.

JANINB.SBS
Would later appear in the next game.

JANINC.SBS
Would later appear in the next game.

JANINF.SBS
Would later appear in the next game.

JANMMA.SBS
Would later appear in the next game.

JDMAXA.SBS
Would make a proper appearance in the next game.

JDRECA.SBS
Is not referenced by any song, even in future installments of the series.

JDTAKB.SBS
Is not referenced by any song, even in future installments of the series.

JTLIAA.SBS
Is not referenced by any song, even in future installments of the series.