The SuperGrafx version of Daimakaimura, or Ghouls'n Ghosts for those outside of Japan, is a much more faithful port of the original Arcade version when compared to the Sega Genesis version. 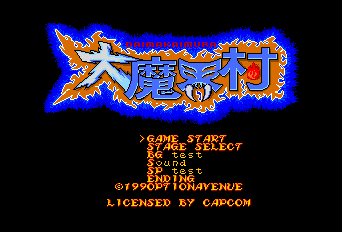 Apply the above patch to a headerless (1,048,576 bytes) ROM, then press Run at the title screen. The functions are as follows:

(And yes, Alfa System somehow managed to misspell their own name.)

During the ending slideshow, hold Up + I + II during the "Knight Arthur" screen until it disappears. If done right, you'll be shown a list of the developers.