A port of the arcade game by Leland and Tradewest, and can be considered the sister game to Ivan "Ironman" Stewart's Super Off Road, also developed by Rare for the NES. 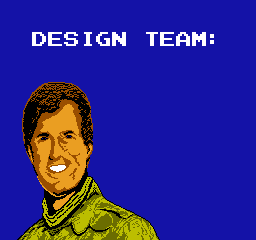 A screen that was obviously intended to show the game's credits can be found in the game. Unfortunately, only the "DESIGN TEAM" text remains (stored with the text for the "DANNY'S TIPS" and "DANNY'S AWESOME WINS" screens), and the game crashes while trying to access the nonexistent credits.

This screen was used in the other ports of the game, but was most likely unused in the NES version due to Rare having a no-credits policy, as to prevent employees from being hired by other companies.

However, if the player wishes to know who worked on the game, the high score screen, like many Rare NES titles, contains aliases of the developers.