Daze Before Christmas is a Christmas-themed platformer that was only released in Europe and Australia.

Various messages and quotes left by the developers are scattered throughout the ROM.

At offset 001D08, immediately before the list of level names:

(translation from Norwegian: "I love you, Sonjaǃ")

Press B, A, Down, Left, A at the title screen. The screen will flash to confirm correct code entry. Now press Start to bring up the level select screen. 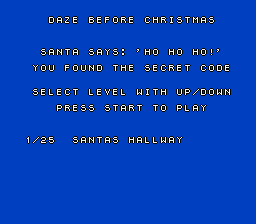