Dead or Alive is the first game in the eponymous series. While the game started out with less female characters than male, and outside of the "jiggling" was pretty tame, the series became synonymous with efforts at sex appeal. 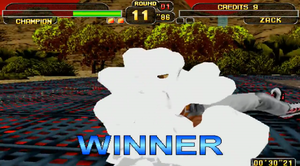 Attainable through the use of playing with the character select values is an unused mess of a character called "Champion". It seems to be comprised of white spheres with some gray markings on one side, and is very glitchy.