Deadlock just might be one of the two finest turn-based 4X games about seven factions vying to colonize a planet ever made in the nineties.

Hold down Option-C while selecting "About Deadlock..." from the Apple menu to access the Command Code Input console.

Enter frodo to fill your provinces with the maximum population they can currently support.

Enter make it so to receive 5000 credits, plus 100 units of each resource.

Enter touche for a window where you can test every dialog clip in the game. You might have to drag the list to one side to see the pre-rendered talking heads that accompany them. 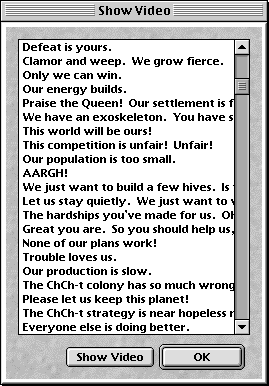 The code sage rat returns a unique message suggesting its functionality was disabled prior to release. 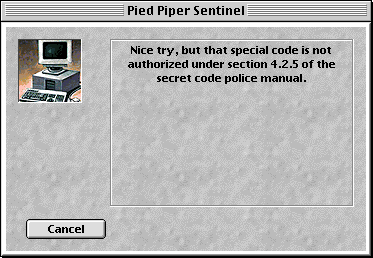 "Debug 1 (AI Stats)" brings up an overview of the AI armies' current activities. 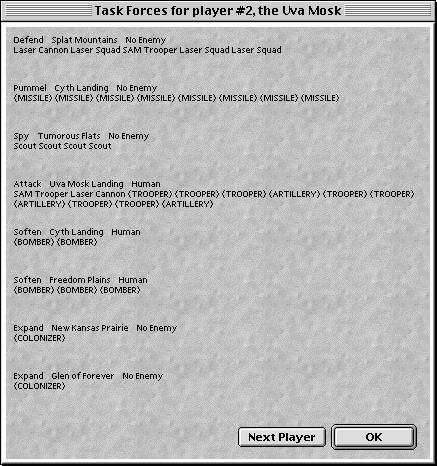 "Debug 2 (God View)" lifts the fog of war, so that you can see all factions' units anywhere on the map.

"Debug 3 (Minister Stats)" provides a look at the AIs' domestic status, as well as who they're at war with and which of five personalities they've been randomly assigned. The personalities are called "Senator Bob", "William the Cool.", "Techademus", "Psycho Psusie", and "Spyder the Spoiler". 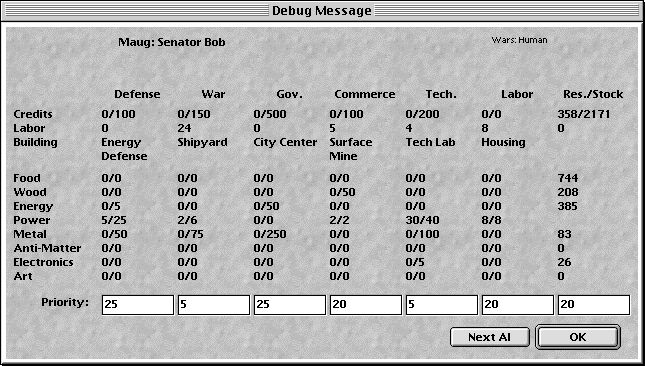 Each playable race has a pair of unused cinematics called "head" and "tail" that would have led into and out of its video messages.

The "head" clips show static clearing to reveal a faction's logo. The seven logos are never seen in-game (except for a glimpse of the Tarth's in the opening movie), but they do adorn the manual and guidebook without explanation.

These emblems were "all done in Photoshop 2.5 using early bump map and lighting tools."

Each is accompanied by a sound effect befitting that race's aesthetic.

Each "tail" clip briefly displays a species' representative looking straight at the camera. (The game's 'talking head' videos all start and end on this pose, which would allow them to chain together seamlessly.) The clip is distorted by animated static, representing the transmission being cut (and disguising the still image underneath).

The audio for each tail is the same as the head, only truncated by 1/5th of a second. The exception is the Cyth tail, which is reversed as well as truncated.

The Skirineen have no logo; their head and tail clips are identical shots of the trader's face accompanied by his usual audiovisual static.

A cut feature would have allowed the Skirineen black marketeer to sell leaders an additional service: commando raids against their rivals. Raids against the player might have been resolved in a 3/4 view action minigame, which was cut in the playable prototype stage due to lack of budget for its assets and the impracticality of the scrolling graphics it demanded.

Each race has unused dialog related to the raids, although some of it only exists as subtitles. (Notice that only the second in each pair of lines specifically addresses that spokesperson's own leader. The first lines seem to be pleas from other species for the player's help.)

The Skirineen's own dialog has the most discussion of raids, naturally.

They have six ways of asking which province to attack...

...and another six of accepting:

An after-action report is part of the service.

The game's personified help system also has some words on the subject:

A related feature was "something kinda cinematic called the Tribunal where you'd be brought before shadowy figures (the overlords who were watching over the Gallius IV contest) for some sort of judgment if you were caught using the Skirineen. Early on it was going to be realtime 3d with some sort of conversation tree [and] minigames." These plans were abandoned "fairly quickly" when real-time 3D of the desired quality proved impossible on home computers of the time.

The finished game contains one orphaned subtitle per race accusing another leader, at a raucous Tribunal, of paying for a Skirineen raid.

The Skirineen trader has many unvoiced lines related to bidding on his services. In the game, he sets prices for everything. (These might have applied specifically to the deleted raid feature discussed above.)

This line is found among each faction's subtitles, directly after the proclamation of victory:

This speech is found at the end of Oolan's subtitles, but doesn't match her role in the final game. While she is the only character to address you as "colony leader" rather than your culture-specific title, it's because she's a neutral observer who advises all factions simultaneously from somewhere in space.

In the final, each race's spokesperson has unique dialog when the game ends, but Oolan has nothing new to say if you call her at that point.

Text exists for many special events beyond those that appear in the game.