With its intricate pixel art universe where every object is mouse-controllable, the inaugural MacVenture game Deja Vu was like nothing seen before.

There are three known versions of the game. Only the 1992 one has a standard version number, which is 2.5.

The releases can be distinguished by the MacVenture engine's hidden self-identification command: highlight the Self button and ask yourself What version?. The game will state whether it is a debugging, demo, or release version, and which one:

In the initial release, the text window has a blank title bar while you're playing an unsaved game. As of 1986, it shows the name Untitled.

The 1992 version replaced the synthesized sound effects with digitized samples. (Due to the complicated MacVenture sound format, the following are line-in recordings from a Macintosh Plus.)

The funeral march was also redone, bringing it closer to the original Chopin:

Although the phone line in Miss Vickers' office is disconnected, her phone will respond to any use of the letter Q, which was skipped on most older telephones. The message indicating this varied slightly between revisions:

The fake telephone used to access the hidden door in Siegel's office has no reaction to the letter Q.

In the 1980s versions, using any of these twelve words will get you chided for your "profanity" or "crude and vulgar language":

The 1992 release added another 44 terms for a total of 56 (the most esoteric, "golden bozos", comes from the same Steve Martin Saturday Night Live monologue that popularized its synonym "hooters"):

Note that the misspelling of the last two words means that their proper spellings go unrecognized.

Two of the files in the 1985 version are called Déjà Objects and Déjà Execution. The revisions have Déjà Object and Déjà Random instead.

The Luger has two sprites: a large one for when it's sitting at the front of the gun shop counter, and a regular-sized one that avoids visually overpowering the rest of your inventory. So do the other guns: you can trade them in for credit, and they'll appear on the counter at the same scale as the Luger.

But that's not all. Three of the items found in your coat at the beginning of the game - the sunglasses, monogrammed handkerchief, and pack of cigarettes - also have larger forms, which can only be seen by taking them out at the gun shop.

Given this, it seems the original idea was to make objects appear larger in the game window than in your inventory. The final game limits this functionality to the Gun Shop room, most likely so the guns look right on the counter. 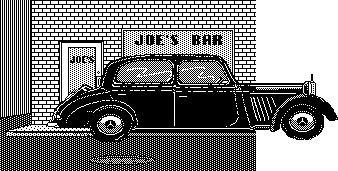 The Mercedes is flagged as undraggable, so there's no way to see that its sprite extends well outside the game window. 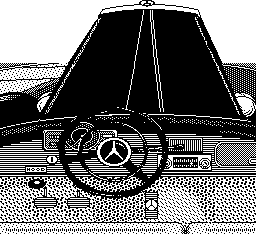 The open hood is draggable, but is only momentarily visible during a death cutscene so you never have a chance to interact with it.

The close-up of Sugar Shack after she shoots you is made up of two elements: an image of her frowning, and a pasted-over smile. Neither the smiling nor frowning versions are ever seen as apparently intended, because the smile is superimposed one pixel lower than it would take to line up with the frown. The result is an ambiguous 'Mona Lisa scowl'.

Compare the animated mockup at left to the final:

The poster of Ace triggers a flashback cutscene whether he's still amnesic or not, which overrides this terse description:

The back door and visible tire of Siegel's car have custom descriptions that are ignored in favor of generic ones ("It looks like a back door"):

That explains why it's permanently stuck, and is the sort of trick you'd expect from a mobster whose bar doubles as a low-budget Bond villain lair.

With no way in the final game to remove, damage, or even examine the tire, its implementation as a separate object would seem to be altogether pointless.

Finally, the open hood can't be examined because popping it sets off the car bomb. Here's what you would have read:

The street mugger and his assorted injuries all carry descriptions, but the injuries aren't selectable and trying to examine the mugger results in immediate death by gunshot.

...which explains why trying to look closer only gets you knocked out.

Another character who'll attack before you can examine her.

Not only do you get eaten instead of receiving the first description, but you're given no chance to examine the dead alligator before being whisked back to the screen you came from.

There's an unused version of the bum's tip with slightly different wording.

You get generic "no effect" messages if you try to barter at the gun shop.

This should probably be the result of trying to punch a cab driver, but all you get is a generic failure message (e.g. "The cab driver seems unaffected.")

Several strings are associated with the hit man, but if you enter the office he shoots you dead before you can try anything. (The "too far away" message is probably in response to trying to punch him.)

There's also an unused description for Ace's signage when the hit man's silhouette no longer darkens the window:

The butler will unfailingly answer the door knocker...until you sock him, after which you can no longer use the knocker because the game will skip directly from the mansion lawn to the vestibule.

A longer, jokier version of the ransom note.

These don't seem to apply to any window in the game.

All four mirrors draw on a shared set of properties, including descriptions for before and after you recover your memory. That means that you never see the unique text for the mirror in Siegel's apartment:

Or the one in the Sternwoods' guest room:

Yet another class of items whose unique descriptions are suppressed: open elevator doorways.

Talking to someone who doesn't have an answer for you should prompt one of these reactions:

Instead, people use the same set of failure-to-communicate responses as inanimate objects, even when these make no sense in context. ("The clerk can't hear you", "You can talk to the clerk all you want, but if he answers ...")

Being arrested before your memory is restored leaves you a hospitalized vegetable, and being arrested afterward triggers a summary of your trial and how the evidence stacked up for or against you. Either way, this generic ending doesn't show up.

You can elicit various reactions by ripping off the newsboy, the cabbies, and the gun seller, but none of them impact the ending.

This hint points at needing to shade the incriminating notepad with a pencil, but it doesn't appear even if you've taken every necessary step to win except that one.

An early, and completely different, draft of the victory ending. (Instead of a "Citizen of the Week" award, the finished game grants a diploma from the Ace Harding School of Investigation.)

The animated "magic lamp" about box misspells Terry Schulenburg's name as "Schulenberg". The initial release contains an unused basic about box that spells his name correctly:

This resource was deleted in the revisions, but the typo in the actual credits wasn't corrected.

A very obscure Easter egg exists near the beginning of the game.

First, go out into the hallway by the women's washroom and take the fly on the doorframe into your inventory.

What, you never noticed the fly? Here it is, highlighted in red:

To click it, you need to position the black tip of the mouse pointer directly over that pixel.

Next, take the fly with you into the women's toilet stall. Open the toilet and place the fly into the toilet window.

Finally, click Self, Operate, and the toilet (not the flush handle).

You'll be transported to an altar where the Holy Grail awaits you. (Except in the 1986 edition, where it's mysteriously nowhere in sight.)

You can take and open the Grail, but nothing fits inside it. Neither the altar nor the Grail have any associated strings or code, nor is there any way to return from this location as it has no exits.

STR# 132 defines the four pronouns that can be assigned to an entity in the game world. Guess which one never is:

This is one of a few places the developers poke fun at their boss, ICOM founder Tod Zipnick, along with the Todd Zipman urine sample and "Zip is a dip" washroom graffiti.

The creators aimed this line at anyone who managed to decrypt the game's text:

They didn't foresee that one player's feat of reverse engineering would permit their games a commercial revival 30 years later, or they might have greeted him with an ASCII high five.

He remarks, "I swear those last 2 are a joke. I've never seen them actually used."

Text exists for a feature that reports the properties of an object in the game world using natural language.

On encountering an error, the game will attempt to report what it was doing at the time.

These are the possibilities:

Another five were removed in the 1992 revision.

If the error is fatal, you have a chance to save your game on the way out:

Still another dialog warns of a RAM shortage...

...and the 1986 release introduced a variant for insufficient RAM at launch.

The following is visible in a hex editor at the beginning of the 1986 application. (Rez was a resource compiler included in the Macintosh Programmer's Workshop from Apple.)

The actual creation and modification dates in that revision span June and July.