Menu code for an unused and broken sound test exists at SNES address 0x84FDF9-0x84FF02. The text/GUI was deleted, and several jumps go to invalid old addresses. However, it's possible to restore the basic functions.

Use these Pro Action Replay codes to boot into the sound test at the title screen.

The screen will be blank, but the controls are simple: 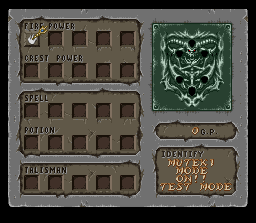 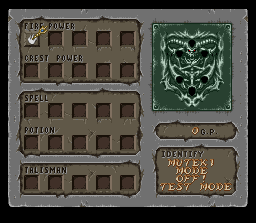 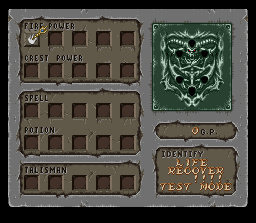 These three 36 byte text strings start at SNES address 0xBD8414. It's possible to view them by setting the item cursor's location to invalid values. It is currently unknown if there's a way to toggle these debug features.

The following conversation may appear with the use of cheats:

The text is about someone complaining that the spell shop in stage II can't be reached due to a wall being in the way, suggesting that an NPC would be near it.

The copyright information was moved to a separate screen in the American version. And besides the main title change, the game's subtitle was removed.

"Speciality" was changed to "Special".

"Blazon Power" was renamed "Crest Power" and the currency "ZAM" was changed to "G.P.". In addition, the Japanese version provides brief descriptions of your inventory under "Identify". The North American version only provides the name.

If the game detects that SRAM is present or that the ROM is larger than usual, the player will be unable to use the pause menu, and all enemies will become invincible.

Either or both of these effects can be enabled using the Pro Action Replay codes 7E0EEBFF and 7E0EECFF, respectively.