This is a sub-page of Densetsu no Stafy. 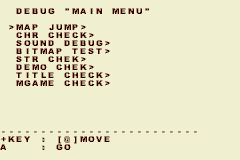 The Debug "Main Menu" lists eight main options, including Map Jump, CHR Check, Sound Debug, STR Chek, Demo Chek, Title Check and MGAME Check. They can be scrolled through using the Up and Down buttons on the D-Pad. All of them except for Title Check bring the player to additional sub-menus when they are selected via the A button. 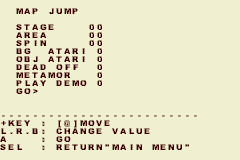 The Map Jump screen presumably allowed the player to play the game from any area or stage, and adjust additional parameters at one point. Although the menu states that the values are adjustable via the L, R or B buttons the ability to do so appears to have been removed. The "00" or "0" values only appear in the ROM as text, and are not real integers. The "Go" option functions correctly, however by choosing "Go", the player is only able to play the first stage (Lobber's Cave) from the first room.

The options from the "Map Jump" menu appear as follows: 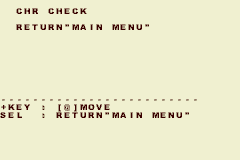 The purpose of this menu is unknown, because choosing it with the "A" button gives only the text Return "Main Menu". The options may have been removed from an earlier version of the game. The name of this menu may imply that it was used to test the characters in some way. 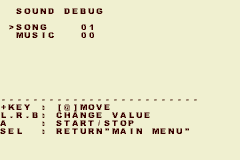 A working sound test. Unlike the accessible music room (available after returning Uotsaruto's Tone of Ocean after completion of the main game), this menu allows the player to listen to all sound effects in the game as well as music. The menu lists two options, including "Song" and "Music". By adjusting the "Song" parameters via the L and R buttons, it's possible for the player to scroll through 117 (0x75) options, beginning with music tracks and ending with sound effects or jingles. The values can be listened to using the A button, or muted by pressing the A button again. Although text at the bottom of the menu suggests that the B button may also be used to scroll through the values, pressing it appears to have no effect.

Pressing the Music option has no effect on the game. It appears to be a dummied out option, because it is impossible to adjust the value via the L and R buttons, and the "00" is actually stored in the ROM as text, not an integer. 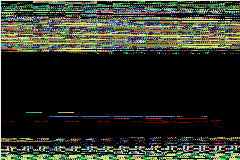 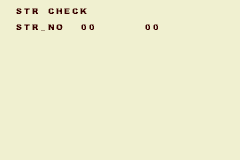 This is the largest of the debug menus, other than the Main Menu itself. It allows the player to enter a variety of interfaces used in the game and adjust their parameters. The menu contains 17 options, as listed below: 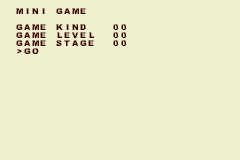 This menu allows the player to adjust the settings of a minigame through three options. The parameters can be changed via the L and R buttons, and the player can play the minigame by pressing 'A' on the 'GO' option.

Two strings of text, encoded as "STAFY OK" exist at offsets 75168 and 75174 respectively. The text strings are stored directly after the "GO" strings belonging to Demo Chek. This text is not visible in the actual debug menu.

Retrieved from "https://tcrf.net/index.php?title=Densetsu_no_Stafy/Debug_menu&oldid=1001196"
Categories:
Cleanup > To do
Subpages