Deus Ex: Human Revolution serves as a prequel to the previous two games in the franchise, primarily exploring Detroit and China in the late 2020s, in a world where augmentations are (somewhat) readily accessible to the masses, and where Sarif Industries are about to make a breakthrough in the tech right before they're sabotaged by an elite group of mercenaries who seem to want to destroy all of this research. A bloody (or simply punch-drunk) trail rife with conspiracy, FEMA camps, morality tests, and forced lethal boss fights follows soon after. Rest in peace, Big Rizzle.

Disabled debug menus are present in the game. By using a modified patch file, you can re-enable the options on the main menu. 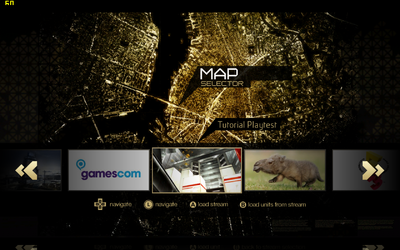 This option will appear at the bottom of the Main Menu when not in-game. Naturally, it lets you start from any part of the game. Once entered, there's no going back to the normal main menu (by default), as choosing "Exit to Main Menu" in-game loads the Map Select again.

While in the menu, there are two selection reels which can be selected by pressing up and down on the keyboard/controller. The top reel is the general chapter/level select, and the bottom one lets you choose a specific area in said chapter to spawn in (for instance, just selecting the FEMA Camp level will start the chapter from the beginning, but you can also choose to skip straight to the Barret boss fight). Note that you will generally start off with few items, no Praxis/XP, and no missions (as well as no way to start a mission in some cases).

There are several areas at the end of the map select that are leftover from testing or press demos. In some cases, they're completely missing NPCs and objectives.

Also of note is that both Hengsha chapters let you spawn in The HIVE and Harvester Hideout areas. Normally, however, The HIVE can only be accessed in the first pass, and the Hideout the second. Spawning in first pass Hideout/second pass HIVE will spawn the player in as normal, except all NPCs are gone, with the notable exception of Tong and the Harvesters in the Hideout room that would trigger a cutscene normally. The door can't be opened, however, nor can the cutscene be initiated. You can, however, kill everyone but Tong using a Laser Rifle. 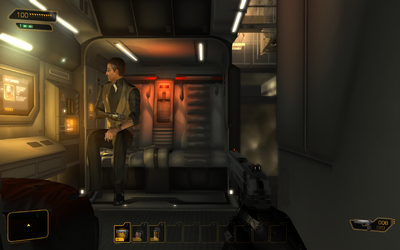 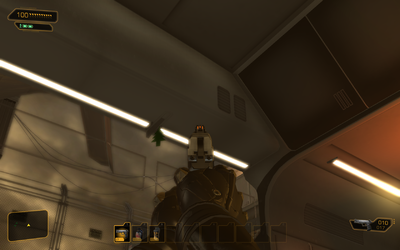 While not unused, it is possible to spawn inside Malik's VTOL and walk around in it by going to CUT_02_SAM_1_TakeOffBreifing_P2 under the Cut Scene section. This area is evidently underneath the starting area of the Sarif Manufacturing Plant. You can't start the cutscene in this area and it's impossible to get to any other part of the level, so you're stuck here. While there isn't much to look at, one can see a little tree hanging near the door frame that normally can't be seen due to the camera angles used in the cutscene.

Spawning on most maps through the debug map select will give the player a 10MM pistol with 30 rounds total, a frag grenade, and a concussion grenade. Some maps have different loadouts, however. 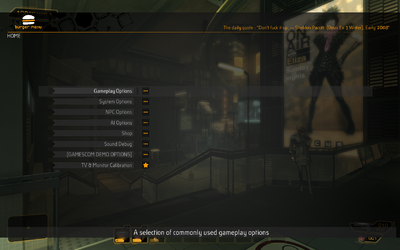 The burger menu will appear in the main menu as "Debug Menu" when in a game. It acts as a general debug menu, as well as containing cheats like spawning items. It also displays a random quote from the game's development in the corner.

“Options only applicable to the Gamescom demo.”

“Helps to calibrate your monitor or HDTV to display the best results ever! Enjoy!” 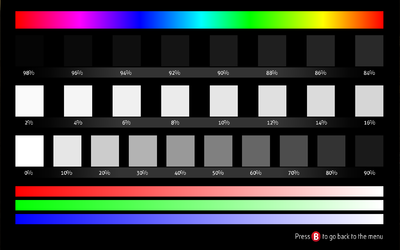 If Jensen is holding a weapon when he attempts to speak with most characters, he will be told to put it away. However, certain areas force weapons to be holstered, so some functional dialogue goes unheard.

Pritchard can normally only be spoken to in person at Sarif HQ, which restricts weapons. The game's tutorial, however, needs to allow weapons, and Pritchard can be found on that map. If the Tutorial Playtest or Sarif HQ Intro Tutorial is accessed through the debug menu, the doors to/out of David Sarif's office will be open, which leads to Athena and the elevator in that room. The elevator doesn't function, but with the Burger Menu's invincibility (and without the Icarus Landing System) the player can walk off the ledge, pull back towards the office, and land on lower floors. These other floors are where Megan gets off the elevator in the introduction, followed by where Pritchard gets on. Since the introduction hasn't begun, Pritchard is patiently waiting in a standard NPC state for the elevator to arrive, on the floor with Malik's VTOL.

This is Dr. Wing Hui of Hengsha's LIMB clinic who offers a sidequest during the second visit. Since he only appears inside the clinic, this cannot be heard as clinics also restrict weapons.