Sprites and Animations for Super Donkey are located in the path other\NEWS\テープリストア\NEWS_11\hino\z-sword. Sprites are held in .CGX files and animations are held in .OBJ files.

Sprites of the playable character when he was Mario. An enemy that resembles a Koopa Troopa and a clam enemy can be seen at the bottom of cg-mario-rom.CGX.

Animations of Mario running and jumping.

An animation of Mario jumping while standing still, as well as an exaggerated "maximum speed" running animation similar to Super Mario Bros. 3.

An animation of Mario flying downwards and stopping.

An animation of Mario changing direction while flying.

Some idle animations, and a walking animation.

Animations of the clam enemy and Koopa Troopa look-alike.

Another file that contains animations of Mario running and jumping. The "X" prefix indicates it was set up to be inserted into the game.

More animations of Mario flying, meant to be used when turning.

Miscellaneous sprites of the player. The spiked shoes look to be some sort of power-up.

Located in z-sword/CHR-stock are sprites of Link from The Legend of Zelda series in a side-scrolling style reminiscent of Zelda II: The Adventure of Link. The dates of the animation files reveal that these sprites predate Mario's. Whether Super Donkey originally starred Link or if these were created for an entirely separate project is unknown.

An overhead view of Link apparently meant for a world map.

The same animations from player-0.OBJ but with the sword in a different position.

This file includes a sword swinging animation, stabbing from behind, and thrusting upwards while crouching.

Some animations of Link jumping.

Link swinging his sword. Of note are the multiple swords present in these frames; these are actually "animation smears".

Swinging behind while crouching.

Miscellaneous animations, including a running jump.

Some of the sprites for Super Donkey can be found in other\NEWS\テープリストア\NEWS_11\hino\z-sword, and are stored in .CGX files. Respectively, the palettes for these sprites are strewn about in the same path and stored in .COL files.

A font that was most likely associated with the HUD. It appears to be directly ported from Super Mario World.

Text saying "Point", also most likely intended for the HUD.

A compressed number set. The "missing" numbers would have been constructed by flipping and reusing parts of other numbers.

The number set used for the timer in both of the available builds, though only the 0 is seen normally since the timer doesn't function in either one.

Some arrows. The third arrow is incomplete.

A series of spheres that scale in size. They are almost identical to the balloon sprites from Super Mario Kart with the only difference of the removed outline and a slightly different color.

A stick of dynamite.

Designs for the pilot's head. In the first one, he's wearing a bandana, giving him a sort of thief look. In the second one, he's lost his hat and has hair that looks quite like Mario's. In the third one, he has a cap on, and in the fourth one he wears a knight's helmet for some reason.

Designs for the pilot's suit. One appears to match up with the knight helmet seen above, while the other looks to be some type of "buff" suit.

A box telling the player to jump.

Yet another sphere, although this one is larger than the others we've seen.

Sprites for an apple, two pineapples, and four watermelons, likely intended for animation.

A box of apples, possibly connected to the apple sprite above.

Sprites of a hammer.

Various sprites for what appears to be a spring of sorts.

Sprites of a bucket.

An object that closely resembles a propane tank. It has "LP" on it, which almost certainly stands for "Liquid Propane".

A box of dynamite.

The trunk of a tree.

ANOTHER SPHERE? Oh wait, this one has a face on it.

A transparent box with nothing in it. Oh well.

Some type of particle.

Mario's head! It's grouped in with several early versions of graphics for the used main character's head, who appears to have a sore nose here. The unknown guy also appears to have no hair on the back of his head, which can be seen in 20-27-hako.CGX. In some of his bottom flying sprites, he has no mustache, whereas he does in both 20-27-hako.CGX and the two playable prototypes.

Note that said flying sprites appear to be cut off. This is because those graphics were overwritten with...

An easy to miss detail is that this hand sprite has been touched up a little in 20-27-hako.CGX.

Some early sketches of Mario. Looks like the artist was considering giving him beady eyes at one point.

Some more sprites of the crystal object.

A miscellaneous person. Possibly a caricature of someone who worked at Nintendo at the time?

An almost complete set of sprites for Mario's head in the pilot's gear. Only a single frame is missing.

The pilot being squished or pressed against something.

A small or chibi version of the pilot.

A small version of the pilot without any outlines on his sprites.

Extremely small sprites of the pilot and an unknown person, the latter of whom may or may not be Stanley from Donkey Kong 3.

A shoe with what looks to be smoke coming out of it.

What looks like roller skates, though the file name suggests these are spiked shoes.

An early version of the buff suit design seen in 20-27-hako.CGX. It's lacking the belt. 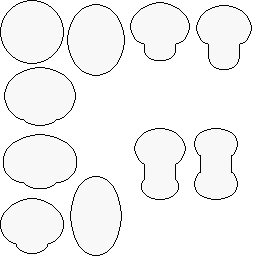 A ball that appears to be morphing, or stretching... or something. 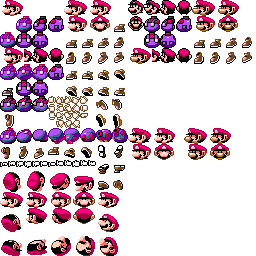 Mario in his traditional outfit. In addition to the softly-shaded style seen in some later renditions of him, there exist sprites with less detailed shading and more pronounced outlines.

An entity that resembles a Koopa Troopa.

Another design for Mario's shoes.

VRAM layout for a possible title screen with the writing "Enkei 1" (エンケイー１), along with a katakana font on the bottom-left. 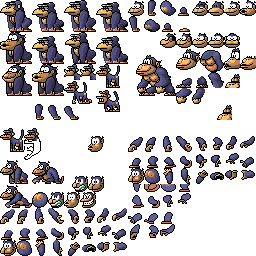 A whole lot of apes. The file name gives further credence to the theory that this was a Donkey Kong-related project.

A touched-up version of the big Kong seen in the previous file, with more detailed shading.

An early version of the boss' head seen in the super_donkey_2.bin build, looking more alien-like.

Multiple variations of an early design for the boss' body, featuring scrawny arms and a feathered body. Note that the first sprite has had some of its graphics overwritten, which is why it's cut off.

Another early design for the body that's fairly large, and colored differently.

A larger version of the design seen above, with more detail and a thicker outline. Again, it has had some of its graphics overwritten.

A more spherical design for the boss' body, with yet more graphics overwritten.

Sprites of some saw blades. Could be an evolution of the ones seen in the super_donkey_1.bin build.

The upper corner of the saw blade seen above, this time with tiny holes present.

An object resembling a ninja star, probably an alternate design for the saw blades.

A spiked ball with each separate sprite adding more spikes. How deadly.

More sprites of the above spiked ball, this time with a nice little pastel palette...

A palette which actually seems to have been intended for the previous sprites as well, given how nicely it fit with them.

Placeholder text for the player. The katakana says "tensou", which could be an odd character name or pun on tensou 転送 "transfer".

Developer text. The kanji here is 常駐 じょうちゅう, "resident". This seems to imply that this is a block of reserved space.

A smaller version of 常駐 fit into a 1-tile-high space. It seems like they didn't know what to do with this area yet.

A cherry or tomato (or cherry tomato) entity.

A bizarre-looking entity. It is somewhat similar to the Squawks in Donkey Kong Country (Super Donkey Kong)

An entity that resembles a pear. It looks like the head of a bug-like entity.

Some weird creature with antennae sticking out of the tops of its eyes. It looks like a miniaturized version of the boss head in mode7-bird.CGX.

An early version of the tomatoes that are hidden in the trees of Level 1 of the super_donkey_2.bin prototype. The odd blue shading may be a remnant of an early palette organization.

Some kind of spike object.

Several frames of animation for a flatly-shaded platform rotating.

The same platform as above, colored and shaded to look metallic. It's also shorter and has less frames.

A wooden block that resembles the one seen in Super Mario Bros. 3.

A block with a star on it. Somewhat resembles the one seen in Super Mario World.

What looks to be a wooden block getting squished.

A version of the pilot's head with a smaller (and red) nose. More of this can be seen in 20-27-mario.CGX.