On 25th July, 2020, a large amount of internal data owned by Nintendo was leaked to the public, apparently originating from either iQue-owned servers or a backup of them. This was a result of an earlier server breach in 2018, which resulted in the leaking of other assets, including but not limited to the Spaceworld 1997 and Spaceworld 1999 demos of Pokémon Gold and Silver and data for Pokémon Diamond and Pearl. The 25th July, 2020 leak included a portion of Super Mario 64's source code, featuring a large number of early and unused assets; while the code appears to specifically be for the Shindou Pak Taiou version of the game, it includes unused assets not seen in any released version, some of which seem to go as far back as 1995.

In depot/mk64/kimura.lzh/include/system.h in the MK64 directory from the same leak, there is an unused alternate lighting for Mario/Luigi. It works differently from the final: it brightens the center of Mario and keeps the sides darker, making it appear as though there's a light source directly on Mario's face. This is likely the lighting used in an animation in the 1995 Nintendo 64 B-Roll, which can be seen in this video. There is also early drop shadow rendering code in shade.c; this is the only bit of code that is confirmed to have been meant for Super Mario 64. 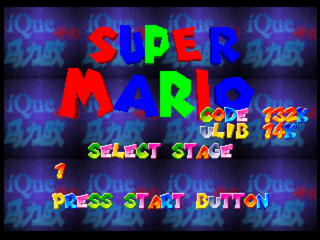 The develop build can be created by specifying it in sm64/include/project.h. When applied, a map select appears at the game's launch with two debug parameters called CODE and ULIB that don't exist in any debugging features in the final game.

In the directory release/pvt_20031022/eng of the depot folder, which contains the full leak, the file sm.rom is a ROM image of the 1997 Shindou Pak Taiou version with English text. It doesn't seem to be a re-translation of the game, but rather just the Japanese base version compiled with the 1996 version's English text using the LOCALE=LOCALE_US compile option. A version of Shindou with the original English text would eventually be released through Super Mario 3D All-Stars, although that would be accomplished by patching in English text during emulation rather than English text being in the ROM itself (mostly text from the original 1996 release, along with a bit from the DS remake to keep consistent with the times).