This is a sub-page of Development:Super Mario 64 (Nintendo 64).

A chasing animation which seems to be for Mario when he is chasing Mips or something/someone else.

A similar animation from the last one but it is slower and Mario's hands are positioned differently.

Yet another chasing animation but this time Mario is in full sprint.

Mario moving down when he was climbing something.

A different climbing animation which depicts Mario climbing a wall (Possibly wire mesh or ladders). This was a scrapped mechanic as Mario cannot climb walls in the retail version.

A similar climbing animation but Mario is facing left.

Another climbing animation but Mario is facing right.

An animation where Mario is holding something underwater, presumably a shell or a cork box.

An animation of Mario floating in water, this version of swimming was used in the SpaceWorld '95 demo.

An animation of Mario slowly paddling in the water, but instead of in a diving position he looks to be walking.

An early animation of Mario grabbing something while underwater, such as a shell.

An animation of Mario throwing something he picked up underwater, which he cannot do in the final game.

An animation of Mario waking up. based on the name, it would have triggered when A was pressed while sleeping.

An earlier animation of Mario taking his cap off after completing a mission/Star.

The same premise where Mario puts his cap back on.

An animation where Mario lands on a log/plank, which is narrow.

Seems to be an anxious Mario as he stands on a narrow log, fearing he may fall.

Mario stepping his left leg ahead on a narrow log.

A similar animation but instead, Mario steps his right leg ahead.

Seems to be Mario almost falling off a narrow log, maybe if the player moves too close to the edge of it or there is a strong wind hitting Mario. Interestingly, this animation was repurposed for use in the N64DD Boot Logo.

The same animation as before but instead Mario is facing right.

Mario landing from jumping or getting off of a ledge/platform.

Based on the name, it appears to be Mario changing flying modes during flight. This could have been a way for Mario to slow down or maybe come to a complete stop while flying.

Seems to be Mario leaning forward as he's about to go fast while sliding. Interestingly, this animation uses an earlier version of the animation format, even having different joint orders making this one of the earliest files in the leak.

Mario braking while he is sliding, possibly when the player would hold down on the joystick. This animation also uses an earlier version of the animation format, like mario_slip_accele, using different joint orders making this another of the earliest files to be found in the leak.

Based on the name, it appears to have occured when taking failed, hence the name "notaking"

Part 2 of the animation, where Mario goes back to his regular idle position.

An animation of Mario covering his face. "oshin" translates to "nausea" so it might've been when Mario got nauseous. Possibly occurring on the ship in Jolly Roger Bay, which has unreferenced shake code in the files.

A similar animation to the last one but Mario is now walking.

An animation of Mario pulling something heavy with both arms, digging his heels into the ground as he moves backwards.

An earlier version of the punching animation.

An earlier animation of Mario picking something up.

A faster and updated version of mario_slip_accele.

A faster and updated version of mario_slip_brake

Mario steering left while sliding but his arms are motionless, which is similar to his sliding animation in the Shoshinkai demo.

Mario steering right while sliding, and again his arms motionless like his Shoshinkai demo animation.

The end of what appears to be an early version of another move that was planned to be implemented but didn't. Based on the name it was likely replaced with breakdancing, possibly due to the move not being particularly useful as an attack.

Mario in the middle of doing the unused move.

The start of the unused move.

An earlier animation of Mario carrying something while swimming, which could've been a shell or something else.

Mario chasing something/someone while swimming, presumably Ukiki (If he was meant to swim) or another scrapped character/thing.

Seems to be Mario picking something up underwater, which is similar to floattake.

Mario jumping while underwater. This looks like a more detailed animation for jumping underwater. Interestingly it appears to be synced to waterwait, potentially meaning it might have been for the earlier version of the metal cap.

An early version of Mario drowning, but he is spinning instead of being in one position like the final game.

Mario stopping from swimming, maybe meant to be when the player stop making him swim.

Mario picking something up but lifting it instead of grabbing it.

Mario being idle underwater, which is similar to his normal standing idle as he moves his head from left to right. It might have potentially been for an early version of the metal cap, as it syncs well with the running animation.

windemoAold features Mario doing some kind of dance. This is an extended version of the victory animation after collecting a star. This is the only animation in the leak that has evidence of being a motion captured animation.

Animations that no longer exist but have names in "shapedef" , names will be presented with the animation number names, as their actual file names are unknown.

Likely exiting the cannon instead of firing, in the final there is no way to exit the cannon without firing. 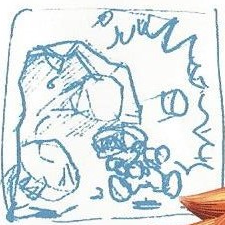 Possibly turning continuously, the animation is in the final as an unused duplicate but shapedef indicates it was originally seperate.

Possibly the animation seen in '95 B-Roll footage. Was likely used for the early title screen with RCP_TitleMarioHierarchy and RCP_TitleLuigiHierarchy.