Present among the July 25, 2020 iQue leak were a number of internal assets related to Super Mario Advance, including a portion of the game's source code. 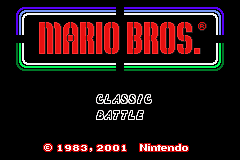 In graphic_data/mario_bros/title/title_maruc.ssc is a titleset for an early Mario Bros. Classic titlescreen, more remniscent of the original arcade game.

It seems that the narrator was going to be used here as well.

Intended for the character select screen.

Present in marioAGB\sound_data\usa_mks4agb1.05\midi are all of the game's music tracks in MIDI format.