In the Special Edition, there is an unused clear bonus art that is assumed to be used when you clear Easy mode as Vergil, judging by the text "Prequel doesn't mean you can be a newbie." being associated with it in the files. 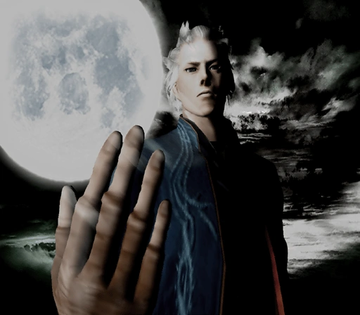 Notoriously, the difficulty in Devil May Cry 3 was increased in America. This was done by shifting the difficulty up by one. For example, Easy in America was Normal in Japan. The American Hard Mode did not exist in the Japanese version either, and was only added as "Very Hard" in the Special Edition later on. The reason this was done was because in the 2000s, there was a 30 day return policy at video game stores, so Capcom USA was instructed to make the game harder for that reason.

In 2006, Devil May Cry 3: Special Edition was released. This added a fair amount of new features such as Vergil as an additional playable character. You unlock Vergil after beating the game once, then you can play as him in a new save file. The game's difficulty was also shifted back to the original Japanese difficulty, with the addition of the American version's Hard Mode being included as "Very Hard." Special Edition also included Devil May Cry 2's Bloody Palace, although instead of restarting over at floor 9999, it finishes. You can also unlock Super Dante by finishing Bloody Palace instead of completing Very Hard mode. A Demo Digest was also added, allowing players to view cutscenes from the game, as well as a hidden cutscene. There were also three fights with Jester added. One being mandatory, and the other two being optional.

In 2020, Devil May Cry 3: Special Edition was ported to the Nintendo Switch with three additional features. The game added Style Switching, which allowed you to freely switch your style with the D-Pad. The game also added an additional mode where you could equip all of Dante's weapons, instead of being limited to just two guns and two Devil Arms. A Co-Op Bloody Palace was also added, where the second player controls Vergil. In March, a patch was issued that fixed a variety of bugs, such as a destructive bug that would corrupt your save data if you tried to select a Dante save data while playing as Vergil.