Diablo is basically Blizzard's second most famous action role-playing series, next to Warcraft, where instead of fighting orcs, you're essentially on a mythical quest to murder everyone's friendly neighborhood dark-lord.

Diablo was originally developed as a turn-based game by Condor Inc. Condor was later bought by Blizzard Entertainment and transformed into Blizzard North. As part of the arrangement, Diablo would have to include real-time combat instead of turn-based combat, and feature multiplayer. Blizzard was convinced that these two features were key after the success of Warcraft. It turns out that they were correct. David Brevik experimented with real-time combat by simply reducing the turn length to 0 seconds, and the rest is history.

Originally, the town of Tristram was going to feature a priest, Tremain, who would've guided you in the last few missions, only to have been killed by a cursed sword. It's clear that this character was cut fairly early on - he has a very incomplete set of dialogue that doesn't even include gossip about the other townsfolk. Graphics for this character exist in /towners/priest/priest8.cel, implying that he was either the eighth character developed or that there were eight different iterations of his graphics. His dialogue is in /sfx/towners, along with all the other townsfolk.

The other townsfolk have unused, voiced gossip lines about Tremain:

Walk sequences exist for Griswold, Gillian and Ogden in eight directions. All town NPCs are stationary in the final game, and these sequences go unused.

The following table outlines all of the dialogue that is unused, and present for all characters. The line number corresponds to the file name. For example, line 02 corresponds to sfx/rogue/rogue02.wav, sfx/warrior/wario02.wav, and sfx/mage/mage02.wav, although the file names for the warrior may vary slightly as they don't follow a fixed convention.

The Rogue has a few lines that don't appear in the dialogue table within the code, and therefore cannot be played:

Additionally, the Warrior has some more lines, most of them being outtakes:

This is dialogue that is present, not used, and does not fall into one of the categories listed above.

In many prerelease screenshots, the spellbook can be seen with 6 tabs instead of the 4 that are present at release. If the player clicks at a very specific spot on the spellbook page, they can access the fifth page, which doesn't show any spells on it.

Sentinel (misspelled as "Sentinal" in the code) unleashes a floating eyeball that shoots fireballs at enemies. Given that this is very similar to Guardian, it was probably cut for this reason. Spell icons, graphics and code all exist for this spell, but it is unable to appear as a book or charges on a staff and the code for it is incomplete. The spell would've used a red book, similar to Fire Bolt and other fire spells.

The Town Portal spell uses a sound effect called sentinel.wav instead of portal.wav (which goes unused), indicating that this sound effect was probably used for the Sentinel spell at one point.

Blood Boil would've slowly killed a target in melee range, while also dealing damage to yourself. A spell icon and sound effects exist for this spell, both of which were re-used (except bldboil.wav, which is listed here) in Hellfire for the Rage skill. Unfortunately the code for it in the retail game is incomplete and does not work correctly.

Blood Ritual exchanges health for mana in various prototypes, but does not function in the retail game. A spell icon exists for this spell. Notable is that the spell icon design was later reused for the Slow Missiles skill in Diablo II.

Doom Serpents appears to be a missile skill that shoots serpents at your foes. A spell icon exists for this spell, but it is a duplicate of the Guardian spell icon. Additionally, there are sound effects, graphics and an entry in the spell table within the code.

This spell would've most likely made you invisible for a period of time, but the code does not function. A spell icon and a sound effect exists for this spell. The design of the spell icon was later reused for the Teleport skill in Diablo II.

This spell would make you stop taking damage for a certain period of time.

All that exists of this spell in the retail game is a single graphic, mindmace.cel, which looks like a spinning mace.

There are five additional unused spell icons that are not attached to any particular spell. Given that they have a red tint to the icon, they would've costed Life to cast instead of Mana.

The Hall of Heroes

levels/l1data/hero1.dun and levels/l1data/hero2.dun are unused sections of the Cathedral map. Originally, they were related to the Catacombs sections; in the pre-alpha versions of the game, the Catacombs were accessable throught a special room called "The Hall of Heroes", where you needed to read a book to open the door, but later the entrance to the Catacombs was changed to just a stairwell. The text was later re-used for the Chamber of Bone quest, and the mention of "The Hall of Heroes" was left as an oversight.

levels\l1data\rnd5.dun is an old variant of the Butcher's Chamber. Still can be seen on old screenshots.

levels/l1data/Lv1MazeA.DUN and levels/l1data/Lv1MazeB.DUN are unused - they are part of an unused Maze level. They were used for an old variant of the Ogden's Sign quest, that originally used the same name - "The Maze". In the final game, it uses a little sub-area instead of separate level.

levels/l3data/lair.dun is not used. It was likely intended for the cut quest involving worms beneath the town.

All of these graphics can be found in objcurs.cel. The name field is the corresponding ITEM_IDS entry (from the Hellfire source code leak).

These graphics can be found in /items within the MPQ.

The files can be found in /objects within diabdat.mpq. 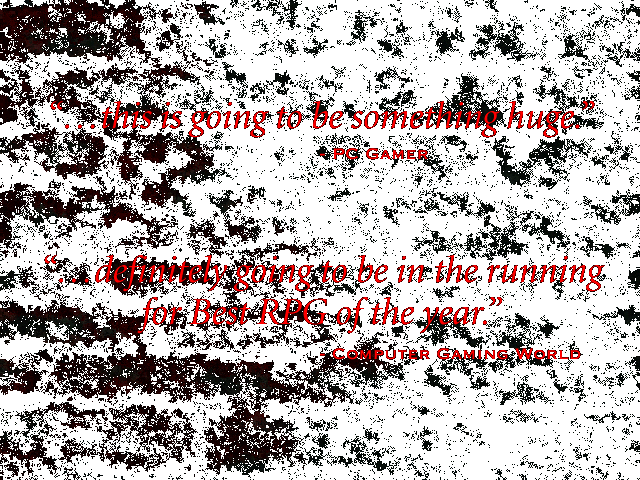 This file, gendata/quotes.cel, is not loaded or referenced by the game's code and it isn't clear how it would be used. It has a transparent background.

This section includes only audio that is not covered by the other sections above.

Not referenced in the code

The entirety of sfx/animals is not used, but oddly, it contains duplicates of sound effects which are in use.

Referenced in the code

The code names as they are specified here were retrieved from the leaked Hellfire source code.

Hidden between Diablo's horns in the setup and boot executables for the first Windows release.

The text on the left reads "BUY WAR II", while the other set reads "NATALIE PORTMAN ROCKS". While it's not 100% certain what the former refers to, it's most likely Warcraft II, another Blizzard game.

Entering Diablo's lair plays an ominous-sounding demonic chant. Reversing the audio, however, reveals the decidedly non-demonic message of "Eat your vegetables and brush after every meal." This is satirizing the Satanic Panic, in particular the idea that certain songs could be played backwards to reveal demonic messages.