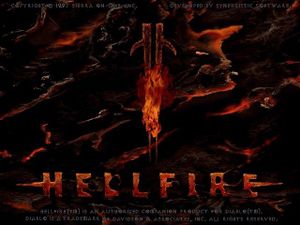 Hellfire was the first and only expansion for Diablo, developed by Synergistic Software and published by Sierra in 1998. Despite Blizzard having a heavy influence over its development (including, strangely, the requirement that multiplayer not ship with the game), it is generally not considered canon and is rarely included in game bundles. Until Diablo became available on GOG.com, it was impossible to purchase through legitimate means.

Notably had its source code leaked on the Internet Archive on June 29, 2019. See the Development page for more.

By adding a file called command.txt to the game's working directory, several pieces of otherwise-unused content and/or Easter eggs can be unlocked. This is not documented in the Readme file or anywhere else.

The file itself should contain options delimited by a semicolon (;), with no semicolon at the start or end of the file. For example, to enable all of the secret options, the file's contents should be as follows:

Adding this option to the command.txt will cause Lester the Farmer (NPC located in town) to be transformed into Complete Nut. The Complete Nut is a character wearing a cow suit and he gives out a unique The Jersey's Jersey quest. This quest tasks the player with recovering The Complete Nut's brown suit, which is located within the Hive levels. By talking to the Complete Nut a few times, the player is given a Rune Bomb to open up the Hive.

In the unaltered game, Lester the Farmer is a minor NPC that handles the Farmer's Orchard quest, and gives the player a Rune Bomb that allows them to access the Hive levels. After clearing the dungeon, the player is given an Auric Amulet.

Additionally, having this option in place will change Na-Krul's dialogue to something a bit...out of character.

Adding this option adds a new NPC to Tristram, named Celia. Celia gives the player the Little Girl quest, where they are tasked with killing the Hork Demon and giving her back her teddy bear. David Brevik did not want this quest in the game, so it became an optional Easter egg item.

Adding this option adds a new character class to the game: the Bard. The Bard uses Rogue graphics and has the unique ability to dual-wield weapons and hit multiple tiles at a time. In addition, the Bard can identify items for free.

Unfortunately, no new graphics were added for the Bard's dual wielding, so it appears as if the player is only wielding one weapon. In addition, there are several issues with dual-wielding.

Without a hacked hellfrui.dll, this option is useless. With one, multiplayer is enabled in the game.

Adding this option adds a new character class to the game: the Barbarian. The Barbarian uses Warrior graphics and has several unique properties:

The Rage skill uses the unused Blood Boil skill icon from Diablo, and some unused sound effects as well.

The palette of the Hive levels is altered.

The palette of the Crypt levels is altered.

All of the inventory graphics added for Hellfire can be found in HELLFIRE.mpq/data/inv/Objcurs2.CEL. Of them, the following frames go unused. Notably, the back of the expansion's box indicated that a lot of these items could be found in the game, but they can't. False advertising?

This is a cut character. Other references to this character exist in the code, but it's fairly stubbed out. Graphics for it can be found in towners/trader.

Donald Tsang, the lead programmer for the expansion, had this to say about it in a usenet post: