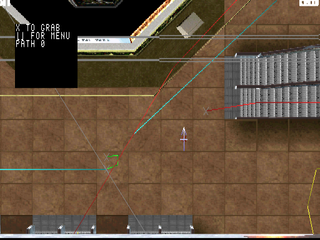 Probe added an in-engine editor tool to the second game due to a lack of enough dev kits to go around. To access it, pause the game, highlight Quit, hold R2, and press Right, Up, Down and Square. The game will automatically unpause. Press Start to find the Pause menu replaced by the Editor menu!

Die Hard With A Vengeance 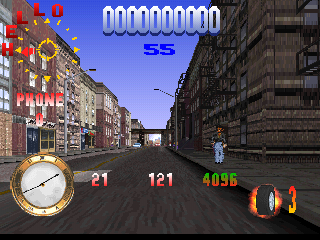 There is also a debug mode in the third game on the disc. To access it, use the same code as with the Die Harder editor: pause the game, highlight Quit, hold R2, and press Right, Up, Down and Square. The game will automatically unpause and a variety of numbers will appear on-screen representing debug information.

Interestingly enough, Die Hard Trilogy supports the neGcon controller by Namco. If you plug it in while the game is running, it will automatically start Die Hard With A Vengeance, using the controller's twist-controls to steer the car.

While none of the US and European releases mention neGcon support, a small logo on the back cover of the Japanese version notes support with the peripheral.