Digimon Digital Card Battle steps away from the monster-raising simulation that the franchise was more well known for at the time, and instead pitches the avatar tamer against various Digimon Adventure and Digimon Adventure 02 characters in card game duels.

A few changes were made to the opening video.

The Japanese version of the game uses the Season 2 opening theme "Target" during the intro cutscene. All other versions use the regular Digimon theme from the American dub.

After the words flash by the second time, the graphics shown between the two differ. In the international release, the card passes through a blue hexagon before shooting into the air via some green and yellow bands. In the Japanese version, it shoots straight past some yellow bands instead.

The text at the end spells out Digital Monster in the international release, and Digimon World in the Japanese version.

The international release uses a pixelated font for the subtitle, whereas Japan uses a normal font. The copyright text is also a different font and of course, there's a noticeable difference in the two logos, with the Japanese logo changing color as well. Since their real life counterparts have a different design, the back of the Digimon cards have been altered to better fit their region.

The Japanese version of the game has one additional option - ディーワン グランプリ (D-1 Grand Prix). 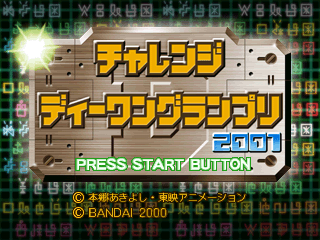 It's not just the opening and title screen that changed the card backs. Oh, no. Every single image containing the card backs has been changed.